Appointments are being taken for marriage licenses and ceremonies, as well as passport services, for Saturday Oct. 19 from 10:00 AM to 3:00 PM, when the offices of the Orange County Clerk-Recorder Department will open for its fifth Saturday of the year.

The Old County Courthouse will be open Oct. 19 for marriage licenses, civil wedding ceremonies and passport applications, as well as property research. Property and vital record copies, as well as marriage services, will be available at the Laguna Hills and Fullerton branch offices. Free parking will be available at all three locations. END_OF_DOCUMENT_TOKEN_TO_BE_REPLACED A Garden Grove man, Sinh Vinh Ngo Nguyen, was charged Friday with trying to support Al Qaeda and making false statements on his passport, according to the U.S. Attorney’s office in Los Angeles, as reported by the Los Angeles Times.

Twenty-four-year-old Sinh Vinh Ngo Nguyen of Garden Grove, also known as Hasan Abu Omar Ghannoum, was stopped at a bus station in Santa Ana, Calif. at 7:30 a.m. by members of the Los Angeles Joint Terrorism Task Force and arrested on suspicion of providing material support to al Qaeda, according to NBC.

Nguyen, also known as “Hasan Abu Omar Ghannoum”, was about to board a bus for Mexico at the time of his arrest, Laura Eimiller of the FBI said, according to CBS. END_OF_DOCUMENT_TOKEN_TO_BE_REPLACED There were 16 crimes reported in Santa Ana on Thursday, October 10, 2013, according to our friends at CrimeMapping. Beauty is in the eye of the beholder…

Art is tied to politics. Some of the greatest works of art have messages tied to all kinds of political topics including social justice, economic disparity, economic policies and history, just to name very few topics.

Politics are not only present in visual art, where they perhaps are most evident, but also in musical art. Politics occur when an orchestra conductor or a philharmonic society that he or she serves decides what music gets programmed. END_OF_DOCUMENT_TOKEN_TO_BE_REPLACED On Monday, October 7, a portion of the roof caved in and collapsed at the historical landmark North Blimp Hangar at the former Marine Corps Air Station Tustin, located in the Third District. The hangar roof was left with a 625-square foot hole. The hangar was designed and built in 1942 during World War II and is mostly made of wood. It covers more than 5 acres and stands over 17 stories tall. END_OF_DOCUMENT_TOKEN_TO_BE_REPLACED

Dialogue/Diálogos Invites you to a Free Theatre-Making Workshop on Saturday, October 12, 2013, from 11:30 am until 2 pm, at the Delhi Center, located at 505 East Central Avenue, in Santa Ana.  No experience is necessary!

This workshop will be an Introduction to Shadow Puppetry and Story-Making by Instructor: José Cruz González , a noted playwright. END_OF_DOCUMENT_TOKEN_TO_BE_REPLACED SANTA ANA, CA (October 10, 2013) – On the morning of Wednesday, October 16, local business owners and managers will gather at the Delhi Center for Santa Ana’s first Economic Development Summit, sponsored by the City of Santa Ana, the Santa Ana Chamber of Commerce and presented by Wells Fargo Bank. The event begins with breakfast, followed by nine workshops to be offered over a three-hour period, and then lunch with a panel of business owners. END_OF_DOCUMENT_TOKEN_TO_BE_REPLACED

The suspect commits theft of copper pipe from a business during hours of operations. The Victim, Legal Aid Society of Orange County located at 2101 North Tustin Ave, Santa Ana, located surveillance footage for the building and discovered the theft occurred on Saturday, July 13th, 2013 at approximately 1445 Hrs. END_OF_DOCUMENT_TOKEN_TO_BE_REPLACED

The Riverside Press-Enterprise is expected to be sold for $27.25 million later this month to Freedom Communications, owner of the Orange County Register (one of Santa Ana’s largest employers), according to announcements from both newspapers, according to Patch.

An investment group led by Aaron Kushner purchased the Orange County Register last year and has rapidly expanded the newspaper. Earlier this year, the paper increased its coverage into Long Beach, with a 16-page Long Beach section and it has been adding to its staff, despite the overall newspaper industry experiencing sharp declines in print ad revenues, according to KPCC. END_OF_DOCUMENT_TOKEN_TO_BE_REPLACED

There were 23 crimes reported in Santa Ana on Wednesday, Oct. 9, 2013 by our friends at CrimeMapping. 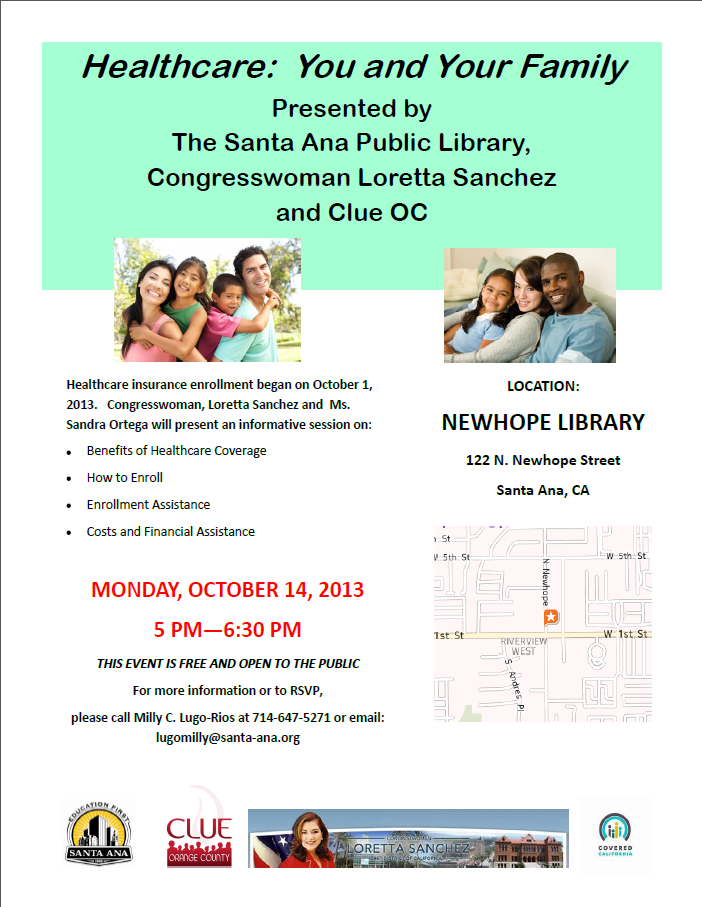 SANTA ANA, CA (October 9, 2013) – Under the Affordable Care Act (ACA) most Americans will be required by law to carry health insurance starting January 1, 2014. Enrollment in the health insurance marketplace began on October 1, 2013. For many, there are still questions regarding insurance coverage, tax credits, and enrollment. END_OF_DOCUMENT_TOKEN_TO_BE_REPLACED