It is extremely difficult to unseat incumbents. All of the incumbents work in education. Torres is a public school teacher in Anaheim. Rodriguez teaches at Cal State Long Beach and Alvarez is a school counselor. All three have been endorsed by the Santa Ana Teacher’s Union.

Alvarez and Torres are also backed by what appears to be a far left organization that is also supporting other local progressives in the Nov. election.

Aguinaga is a realtor who has run for the SAUSD School Board several times. She is also a former fifteen-year SAUSD Parent Coordinator. She serves on the O.C. Vector Control Board of Directors and is the Vice-Chair pf the Santa Ana Community Housing Redevelopment Commission. She ran in the last election with a lot of support from the Santa Ana Police Union but did not prevail. You can read her candidate’s statement here.

Carillo, according to her candidate’s statement, is a Health Education Advocate. She is an SAUSD grad who went on to receive her bachelor’s degree from Allegheny College in Pennsylvania. She is calling for a top-down public audit of all SAUSD spending, which is probably a very tood idea.

Reyes offers perhaps the most interesting story. He is a graduate of Saddleback High School who went on to earn a degree at UCLA then played pro soccer in Europe and then he was scouted to play professional beach soccer with the U.S. National Team where he played in his first World Cup in 2019.

Reyes then started his own company, King’s Pro, Inc. which specializes in custom shin guards for soccer players.

He is now a substitute teacher at Carr Intermediate and a soccer coach.

You can learn more about Reyes on his website. 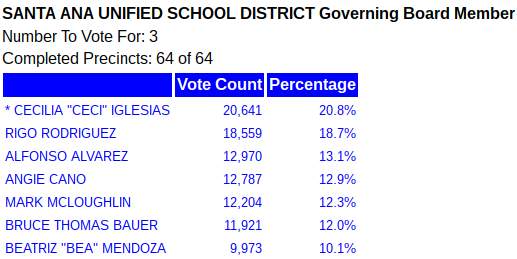 As for the teacher’s slate, only Rodriguez and Alvarez emerged victorious (assuming that Cano doesn’t edge out the latter when the final vote tally is announced this week).
END_OF_DOCUMENT_TOKEN_TO_BE_REPLACED

These candidates, including Rancho Santiago Community College District Trustee Claudia Alvarez and the slate of SAUSD School Board candidates sponsored by the Santa Ana Educators’ Association (the teachers’ union) – including Rigo Rodriguez, Mark McLoughlin and Alfonso Alvarez, have forgotten that Santa Ana is not quite as Democratic as they think it is. END_OF_DOCUMENT_TOKEN_TO_BE_REPLACED 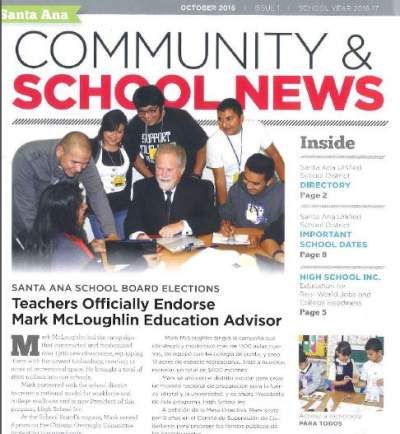 It looks like SAUSD School Board candidate Mark McLoughlin has ditched the other two candidates who were also endorsed by the Santa Ana Educators’ Association – Dr. Rigoberto Rodriguez and Dr. Alfonso Alvarez. McLouthlin’s campaign just dropped a mailer that omits any mention of Rodriguez and Alvarez and encourages voters to only vote for McLoughlin. END_OF_DOCUMENT_TOKEN_TO_BE_REPLACED

Norberto Santana, the Editor of the Voice of OC, a digital publication, served as the event moderator. The questions however were not posed by him. Instead a panel of local intermediate and high school kids asked the questions. END_OF_DOCUMENT_TOKEN_TO_BE_REPLACED

So why are the unions at war with each other? Why run so many similar candidates (honestly all of these candidates pretty much agree on close to 100% of the issues) for the same body? END_OF_DOCUMENT_TOKEN_TO_BE_REPLACED

SAEA President Barbara Pearson declared “SAEA and CSEA are endorsing the same candidates for the three openings on the Santa Ana School Board for the November Election. We came together to support three superb candidates because the Santa Ana School Board needs experienced and knowledgeable individuals who can provide steady leadership to improve educational opportunities for all of our students.” END_OF_DOCUMENT_TOKEN_TO_BE_REPLACED

There are quite a few candidates vying for these School Board seats including: END_OF_DOCUMENT_TOKEN_TO_BE_REPLACED