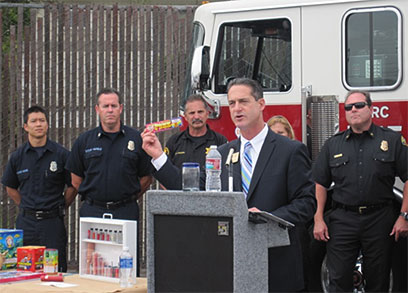 “Water boils at 212 degrees, glass melts at 900 degrees, and fireworks sparklers burn at 1200 degrees,” Supervisor Spitzer said. “Please be aware of the extreme heat of a burning sparkler and all safe and sane devices while safely operating such fireworks.” END_OF_DOCUMENT_TOKEN_TO_BE_REPLACED

Additionally tickets and donations can be sent to 2132 S. Sycamore St., Santa Ana, CA 92707. If you would like to support the event by volunteering, please contact Rosalba Hernández at rosalba.hernandez9@gmail.com or 714.357.7446.  END_OF_DOCUMENT_TOKEN_TO_BE_REPLACED

Many thanks to this year’s parade co-sponsors, who will be donating labor, snacks and prizes for best floats: END_OF_DOCUMENT_TOKEN_TO_BE_REPLACED SANTA ANA – A father was convicted today of the murder of a Santa Ana man after becoming angry over a physical altercation that occurred one month prior between his daughter and the victim. Cesar Gerardo Marta, 41, Omaha, NE, was found guilty by a jury of one felony count of second degree murder and has a 1993 prior strike conviction for robbery. He faces a maximum sentence of 35 years to life in state prison at his sentencing Aug. 9, 2013, at 9:00 a.m. in Department C-41, Central Justice Center, Santa Ana.

At approximately 10:00 p.m. on May 26, 2010, 27-year-old Cesar “Danny” Gutierrez Hernandez left his Santa Ana home with his brother and a friend to give the friend a ride home. As the three men walked toward their car, Marta and an unknown accomplice approached the group and asked if one of them was Danny. The defendant sought out Hernandez with the intention of retaliating against him for a physical altercation between the victim and Marta’s daughter one month earlier. END_OF_DOCUMENT_TOKEN_TO_BE_REPLACED WESTMINSTER – Law enforcement is seeking the public’s help identifying potential additional victims of a teacher charged with sexually assaulting a female relative. Jeffrey Scott Jones, 53, Huntington Beach, is charged with two felony counts of aggravated sexual assault of a child and one felony count of continuous sexual abuse. If convicted on all counts, he faces a maximum sentence of life in state prison and mandatory lifetime sex offender registration. The defendant is being held on $1 million bail is scheduled for a continued arraignment Aug. 16, 2013, at 8:30 a.m. in Department W-2, West Justice Center, Westminster. END_OF_DOCUMENT_TOKEN_TO_BE_REPLACED The Santa Ana Unified School District Board of Education appointed Mark McKinney Associate Superintendent of Human Resources at the June 11, 2013 Board of Education meeting. In Mr. McKinney’s new role, he will plan, organize, and imple­ment the overall operation of the Human Resources Division including personnel, risk management, employee benefits; monitor the expenditure of funds assigned to Human Resources Division to ensure maximum effectiveness and achievement of District objectives; and maintain and ensure a continuous personnel appraisal and evaluation system. END_OF_DOCUMENT_TOKEN_TO_BE_REPLACED There are 75 fireworks booths selling safe and sane fireworks in Santa Ana this year. Each booth is operated by a local charity. Chances are you know many of these or even belong to some of these organizations, which include local schools, youth sports teams, churches and temples.

The Santa Ana Public Information Officer, Jose Gonzalez, has provided us with a list of the booth operators and their locations so that you can go buy your fireworks from the charity or non-profit of your choice. This is a big deal for many of these organizations. They rely on this money to fund their programs.  Please be sure to be safe!  Click here for a great new article on fireworks safety.

Here is the 2013 list of Santa Ana Fireworks booths – this is a New Santa Ana exclusive: END_OF_DOCUMENT_TOKEN_TO_BE_REPLACED This is our newest feature – a daily crime report for the City of Santa Ana, courtesy of our friends at CrimeMapping.com.

The information below pertains to crimes committed on July 1 2013. There were 16 new crimes reported on July 1: END_OF_DOCUMENT_TOKEN_TO_BE_REPLACED

Godinez was thought to be the leading candidate to become Santa Ana’s next City Manager, but guess what?  El Monte retained the services of executive search firm Bob Murray & Associates, the same company tasked with hiring a new City Manager for Santa Ana.  So they found Godinez a job, but not here in Santa Ana. END_OF_DOCUMENT_TOKEN_TO_BE_REPLACED

This is our newest feature – a daily crime report for the City of Santa Ana, courtesy of our friends at CrimeMapping.com.

The information below pertains to crimes committed on June 30, 2013.  There were 35 new crimes reported on June 30: END_OF_DOCUMENT_TOKEN_TO_BE_REPLACED

Fritters have existed in Europe since the middle ages. The Scots, and later Scottish immigrants to the southern United States, had a tradition of deep frying chicken in fat, unlike their English counterparts who baked or boiled chicken. END_OF_DOCUMENT_TOKEN_TO_BE_REPLACED The purpose of the workshop is to provide manicurists, salon owners, students from beauty colleges and others in the nail salon industry with a legislative updates and information on the health and safety regulatory requirements. In addition, agency representatives will provide information on how to comply with state standards to avoid citations, as well as the citation appeals process. END_OF_DOCUMENT_TOKEN_TO_BE_REPLACED

Costa Mesa, Calif. (June 28, 2013) – The OC Fair is celebrating the spirit of the community with its new Summer In the Cities programming, which includes local entertainment, exhibits and discounts for residents.

On specific days, representatives and residents from cities in Orange County will lead Fairgoers in a Community Flag Salute and singing of the National Anthem at 12:30 p.m. in front of The Hangar. Also, residents of the featured city can enjoy discounted Fair admission with their Summer In the Cities coupon, available at their local city hall or library.

The 2013 OC Fair Summer In the Cities schedule is: END_OF_DOCUMENT_TOKEN_TO_BE_REPLACED