Hernandez had an affair with a fellow Council Member, and he did the right thing and resigned.  What about Santa Ana Council Member Carlos Bustamante?  He has been charged with a plethora of felony sex crimes and public theft, and Orange County District Attorney Tony Rackauckas basically called him a predator.  Why hasn’t Bustamante done the right thing and resign from the Santa Ana City Council? END_OF_DOCUMENT_TOKEN_TO_BE_REPLACED 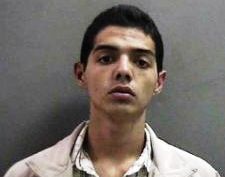 SANTA ANA – A son was convicted today for plotting with her mother and murdering a Santa Ana jewelry salesman while robbing him of his cache. Ricardo Dagoberto Diaz-Nivarez (pictured above), 27, Santa Ana, was found guilty by a jury April, 4, 2012, of one felony count of first degree murder. Diaz-Nivarez faces a maximum sentence of 25 years to life in prison at his sentencing May 18, 2012, at 9:00 a.m. in Department C-30, Central Justice Center, Santa Ana. END_OF_DOCUMENT_TOKEN_TO_BE_REPLACED