Kim Nguyen endorsed for Supervisor by the Assn. of O.C. Deputy Sheriffs 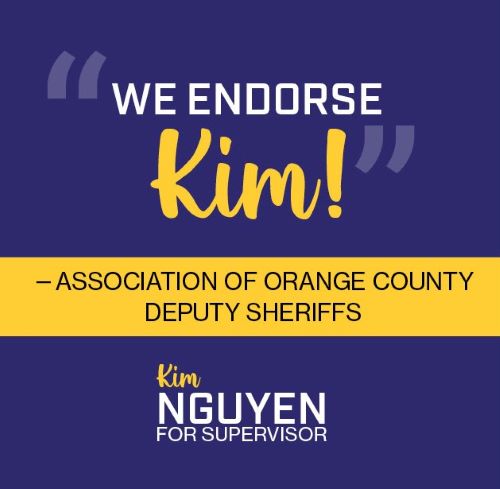 Councilwoman Nguyen has become the choice of public safety professionals for her commitment to keeping residents safe and protecting communities across District 2. She has already been endorsed by three other law enforcement associations, including those representing the cities of Tustin, Garden Grove, and Santa Ana. In addition, she released the following statement:

“I am honored to have earned the endorsement of the men and women of the Association of Orange County Deputy Sheriffs who help keep us safe across Orange County. I am humbled by their trust in me and will always work hard on behalf of public safety professionals and our first responders.”

AOCDS had this to say about their endorsement, “Far too few of us accept the responsibility of seeking public office. We appreciate Councilwoman Nguyen taking an active part in our County, her years of honest and dedicated public service, and her support of law enforcement.”

Re-elected in 2020 with over 70% of the vote, Kim Nguyen is a first-generation Vietnamese and Mexican-American Councilmember in Garden Grove and was the first Latina and youngest person ever elected to the city in 2016. She has already secured endorsements from a diverse coalition of federal, state, and local elected officials throughout Orange County, as well as numerous organizations.

An resident of District 2 for over 20 years, Councilwoman Nguyen attended Clinton-Mendenhall Elementary, Doig Intermediate, and Santiago High School. She graduated from the University of California Santa Cruz with a degree in politics and a minor in legal studies. She is the first in her family to graduate high school and receive a college degree. She is a Senior Health Care Analyst for a large health plan. The 2nd Supervisorial District includes the city of Santa Ana, and portions of Anaheim, Garden Grove, Orange and Tustin.