Santa Ana Police Detectives are asking for assistance in locating Albert Sierra (32) who is suspected of twice burglarizing the Mexican Consulate at 2100 East 4th Street, in Santa Ana. 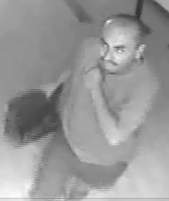 Sierra is also wanted for committing at least three additional burglaries between July-August 2016 at businesses in Santa Ana where he stole thousands of dollars in computer equipment.

Anyone with information is asked to call Detective Duane Greaver at 714-245-8362 or Orange County Crime Stoppers at 1-855-TIP-OCCS.