Watch the Shrek Jr. Musical, live, at Santa Ana H.S. on June 5 for only one dollar

He may be a big, scary, green ogre to the rest of the world, but as they story reveals, he’s really just a big fellow with a big heart. It is great if Shrek is a solid singer, but most importantly, snag a young man who is an excellent actor with comedic chops.

It’s a “big bright beautiful world” for everyone’s favorite ogre in Shrek The Musical JR., based on the Oscar-winning DreamWorks Animation film. Adapted for young performers and featuring a host of over-the-top roles for an expandable cast, there’s a part for everyone in this dazzling adventure story.

In a faraway kingdom, the green ogre Shrek finds his swamp invaded by banished fairytale misfits, runaways who’ve been cast off by Lord Farquaad, a tiny terror with big ambitions. When Shrek sets off with a wise-cracking donkey to confront Farquaad, he’s handed a task – if he rescues feisty Princess Fiona from the Dragon-guarded tower, his swamp will be returned to him. But, a fairy tale wouldn’t be complete without unexpected twists and turns along the way. 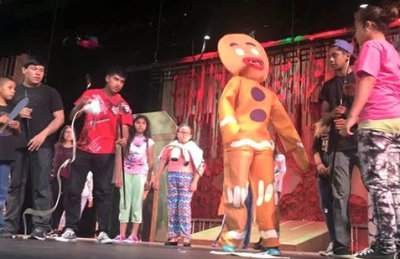 Part romance and part twisted fairy tale, Shrek JR. is an irreverently fun show for the whole family. With abundant opportunities for imaginative sets and costumes and familiar characters that prove that beauty is in the eye of the ogre, Shrek JR. is a great choice for young performers.

One thought on “Watch the Shrek Jr. Musical, live, at Santa Ana H.S. on June 5 for only one dollar”