Here’s something fun for the young football fans in your family! Youth co-ed flag football season begins Monday, Aug. 30, and is open to children ages 3 to 14.

Online registration is required and is open from Aug. 2 through Aug. 13.

Registration fee is $38.00 per child and includes a team shirt, participation trophy, and a 10-week program of practices and games culminating in a celebratory closing ceremony.  Volunteer coaches needed!

For additional information, see program flyer or contact the Youth Sports office at (714) 571-4264.

The City of Santa Ana’s Youth Sports co-ed Rookie Ball Program is back. The program begins on Tuesday, June 1, and is open to youth ages 3 to 14. Registration is required at https://secure.rec1.com/CA/santa-ana-ca/catalog. Registration is open from May 10 through May 28, 2021.

Registration fee is $38.00 per child and it includes a team shirt, cap, participation trophy and an 11 weeks program of practices and games culminating in a celebratory closing ceremony. Volunteer coaches needed!

For additional information, see program flyer or contact the Youth Sports office at (714) 571-4264.

The City of Santa Ana’s Youth Sports Program is offering free Girls Basketball Clinics. The program begins on Monday, March 29, and is open to girls ages 5 to 14.

Registration is required and available at https://secure.rec1.com/CA/santa-ana-ca/catalog.

The swim lessons program begins on Monday, March 29, and is open to 5 years to adults.

Registration is required and available at www.swimblueray.com/memorial for additional information; please contact the Blueray office at (949) 459-3950.

The SAUSD has reversed last week’s announcement regarding spectators at youth sporting events. The SAUSD announced on Thursday that they will now allow limited spectators at these events.

Athletes will now be allowed two spectators for each game. No other community members will be admitted.

When the SAUSD previously announced that no spectators would be allowed at youth sporting events they were widely lambasted by many in the community as the area private schools, such as Mater Dei, were allowing limited spectators.

The Santa Ana Unified School District has approved a plan to allow student athletes to return to conditioning programs and even to compete in sports allowed by the most current guidelines from CIF and health care experts.

The SAUSD community remains in the Purple “Widespread” Tier. Under CIF and California Department of Public Health (CDPH), athletes in districts in this tier can participate in outdoor, socially-distant conditioning, practice, and skill building within designated small pods. The District plans to resume this month these activities at high schools following all safety protocols. Individual schools will determine when to safely resume these activities, and will provide more information to student athletes.

The accolade was awarded by software company ​VNN​, ​whose sports marketing platform powers​ 2,500 high school athletic departments across 40 states ​including noblesvillemillers.com​. By ​quantifying community support from July 2019 through August 2020 with a unique weighted average, each school received a score that could be compared across VNN’s network. The four main criteria of the average included popularity of content posted about the school’s sports teams (35%), coach involvement (20%), student body and fan engagement (35%) and positive influence within the company (10%). This was designed to level the playing field so schools of all sizes had an equal chance of reaching the top.

SANTA ANA, California – A former Orange County financial advisor and lawyer was sentenced today to 37 months in federal prison for stealing millions of dollars of his pro athlete clients’ money and investing it in a cash-losing ticket company on which he was a board member.

Ash Narayan, 55, of Irvine, was sentenced by United States District Judge Josephine L. Staton, who also ordered him to pay $18,811,231 in restitution. Narayan pleaded guilty in June 2019 to a two-count information charging him with wire fraud and subscribing to a false tax return.

Narayan worked as an investment advisor at RGT Capital Management Ltd.’s Irvine office and also was a licensed California lawyer until his disbarment earlier this year. At RGT, Narayan’s clients were high-net-worth individuals who were current and former professional athletes.

In addition to his job at RGT, Narayan served on the board of directors for The Ticket Reserve Inc. (TTR), an Illinois-based technology company that allowed customers to buy an option on a ticket to future sporting events, such as playoff games, which they could cash in if their team made the postseason. TTR never was profitable and carried millions of dollars in debt.

From December 2009 to early 2016, Narayan advised his clients to invest in TTR, but failed to disclose to them his role in the company as well as the fact that it was a high-risk investment and an unprofitable business. At times, Narayan directed RGT employees to forge his clients’ signatures on wire authorizations to direct significant amounts of his clients’ money into TTR without their knowledge or consent.

Narayan left RGT in 2016 and The Ticket Reserve was put into receivership later that year.

Narayan also knowingly subscribed to a materially false federal income tax return when he reported that his total income for 2012 was $543,072, when in truth it was $1,138,072.

In a related case brought by the Securities and Exchange Commission in federal court in Dallas, Narayan was ordered to repay $1,498,000 in ill-gotten gains as well as a $350,000 civil penalty.

This matter was investigated by the FBI and IRS Criminal Investigation. This case was prosecuted by Assistant United States Attorney Jennifer L. Waier of the Santa Ana Branch Office.

Registration for the event is free for all runners and walkers. Plaques will be presented to the top 3 overall male and female finishers. Invite your friends and family to join you in this year’s run or cheer you on along the course and through the finish line.

Space is limited, so register early at: https://register.chronotrack.com/r/53843 More information on new course route and packet pick-up to follow. See you on October 19th!

SANTA ANA, CALIF. – EōS Fitness, a leader in the fitness industry with its High Value Low Price (HVLP) ® gyms, is opening a new location in Santa Ana, California, its first in Orange County.

EōS Fitness is rapidly expanding throughout the Southwest with almost 40 current locations in Arizona, California and Nevada, and several new ones scheduled to open in Florida later this year. The brand is well-known among consumers for its high-value amenities, affordable membership options and 24/7 gym access.

Some signature amenities at EōS Fitness include “The Yard,” its green turf functional training area with ample space for sled and battle rope workouts, and MOVEōS Cinema, a theater-like room with a variety of cardio equipment where movies are played during workouts.

“We will continue to add new locations throughout Southern California, bringing our accessible fitness model to more and more neighborhoods and communities,” said Rich Drengberg, CEO of EōS Fitness. “EōS Fitness is unique in its offering. We feature affordable options for all levels of gym-goers, and we offer a suite of high-value amenities that can’t be beat.”

The new Santa Ana EōS Fitness features 35,000 square feet of space and will be located at 1501 N. Tustin Ave. In addition to the brand’s signature amenities, the new gym will be equipped with over 50 group fitness and cycle classes weekly, a spacious free weight area, an indoor lap pool and hot tub, separate men’s and women’s saunas and a spacious Kids’ Club with a jungle gym, basketball court, and mini movie theater. 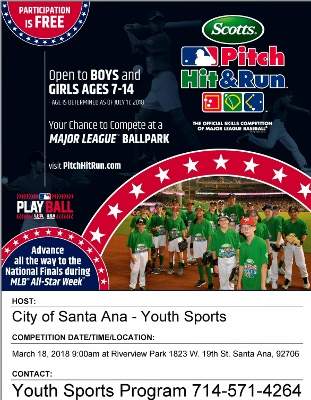 SANTA ANA, CA – The City of Santa Ana’s Parks, Recreation and Community Services Agency Youth Sports Program is proud to serve as a host site for the 2018 Pitch, Hit & Run competition and Jr. Home Run Derby. Pitch, Hit & Run is the official skills competition of Major League Baseball. This grassroots program is designed to provide youngsters with an opportunity to participate; free of charge, in a competition that recognizes individual excellence in core baseball/softball skills. The Jr. Home Run Derby is a free, fun and exciting youth competition that allows talented youngsters to showcase their hitting abilities, with the opportunity of competing at a National Finals during Major League Baseball All-Star Week. END_OF_DOCUMENT_TOKEN_TO_BE_REPLACED 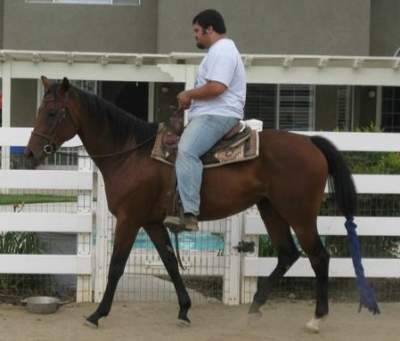 A new golf facility unlike anything seen before is opening its doors to the public via an open house at 208 N. Broadway in downtown Santa Ana from 6 p.m. to 10 p.m. on Saturday, May 6.

The NextLinks facility promises real indoor golf in a fun, entertaining and social environment for golfers and non-golfers. END_OF_DOCUMENT_TOKEN_TO_BE_REPLACED 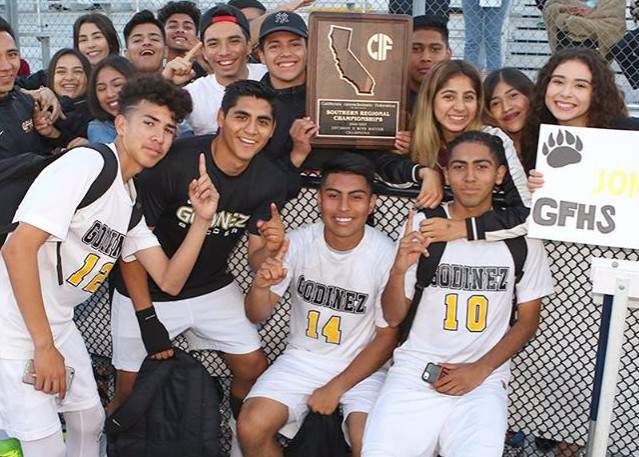 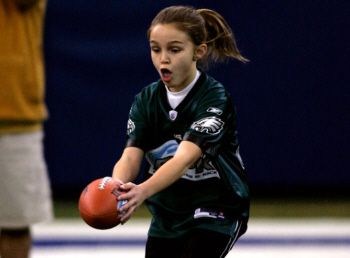 SANTA ANA, CA – The City of Santa Ana’s Parks, Recreation and Community Services Agency’s Youth Sports Program is proud to be a host site for the 2016 Punt, Pass & Kick (PP&K) competition. The PP&K is the official youth skills competition of the National Football League (NFL). This program is designed to provide youngsters with an opportunity to participate; free of charge, in a competition that recognizes individual excellence in three core football skills. 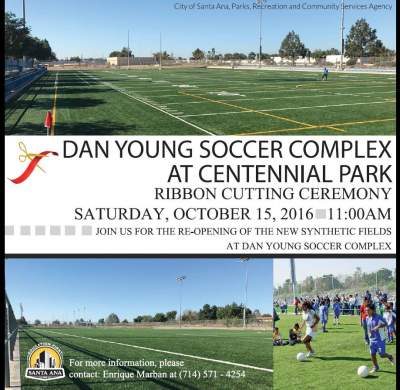 The DYSC Youth Field #4 is the City’s first synthetic turf youth soccer field exclusively dedicated for youth soccer. Due to heavy use, weathering and expiration of the turf service life, the field surface needed to be replaced. The Parks, Recreation and Community Services Agency (PRCSA) identified funding in fiscal year 2015/16 from Park Acquisition and Development Funds, Park In-Lieu Funds, Strategic Plan Funds and Budget Surplus Funds to replace the synthetic turf on Field #4. Similar funding was identified the following year in fiscal year 2016/17 to also replace the synthetic turf on Adult Field #2. The project included the removal and disposal of the existing synthetic turf, inspection of the existing drainage system, and preparation and installation of the new synthetic turf. END_OF_DOCUMENT_TOKEN_TO_BE_REPLACED