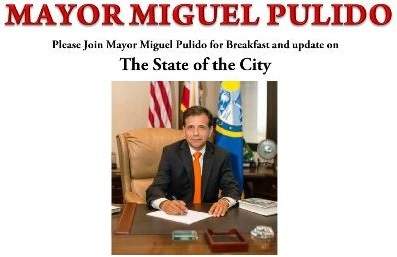 Since he was first elected to the Santa Ana City Council in 1986, Mayor Miguel Pulido has been a major force in the renaissance and economic revitalization of the City.  He is currently serving his sixth term as Mayor and has proven to be a leader, not only within the community, but regionally and nationally.  Mayor Pulido has focused his efforts on improving the quality of life for all Santa Ana residents.   During his tenure the City has experienced a 58 percent reduction in crime, an increase in home values, a rise in the number of business licenses, an enhancement of the economic opportunities for the private sector, an overall revitalization of the City’s infrastructure and an expansion in social and culture venues.

Under Mayor Pulido’s leadership, the City of Santa Ana has benefited from a tremendous growth in economic opportunities.  As a result of his advocacy efforts, the City of Santa Ana was designated an Enterprise Zone by the State of California in 1993 to promote business growth and job generation by offering state tax credits and highly valuable incentives to businesses.  To date, nearly 35,000 hiring tax credits have been awarded to Santa Ana firms.  Mayor Pulido has also taken a lead role in facilitating business opportunities in the global economy.  In 1999, he spearheaded the Orange County International Trade Center Advisory Council’s efforts to develop a strategy for assisting local businesses expand into international trade.  In 2001, Mayor Pulido established the International Business Center and negotiated with President Fox to open Mexico’s first trade center in Santa Ana.  He was also appointed by the President to serve on the Federal Inter-Governmental Policy Advisory Committee on Trade, where he provides advice to the United States Trade Ambassador.

Mayor Pulido has been a major champion of the arts and culture movement.  He formed the Mayor’s Task Force on Arts and Culture which has been instrumental in the development of the Artists Village in downtown Santa Ana, which includes theatres, galleries, and performance venues.  Placing an emphasis on education, Mayor Pulido brought in California State University Fullerton’s graduate arts program and facilitated the relocation of the Orange County High School of the Arts into Santa Ana.  Furthermore, Mayor Pulido led the City’s effort to locate the Discovery Science Center in the city’s Museum District and he has worked aggressively on the $10 million expansion of Bowers Museum.  The Mayor serves on the Bowers Museum President’s Advisory Council, and was part of the negotiating team on the agreement with the British Museum to establish the first ever permanent exhibit of the British Museum outside of London.

During the Mayor’s tenure, the City has also seen the rebirth of our community spirit while maintaining a strong commitment to our historical heritage.  Despite two decades of phenomenal population growth (more than 70%), 60 neighborhood associations have been formed to reflect a strong community presence.  The partnerships that Mayor Pulido and the Council have fostered between these groups and City Hall have resulted in greater participation by Santa Ana residents in government issues and an increased quality of life in their neighborhoods.

More importantly, Mayor Pulido secured Federal Empowerment Zone status for some of the City’s most disadvantaged neighborhoods, delivering federal funds to build capital, increase employment and to provide needed services to these residents.   Mayor Pulido was appointed to serve on the State of California Workforce Investment Board to further employment opportunities, and job services for our residents.  He was also appointed by both Governor Davis and Governor Schwarzenegger to serve on the State Teacher’s Retirement Board.

One of the greatest accomplishments during Mayor Pulido’s term has been the significant decrease in crime.  The City has experienced a 64 percent decrease in crime over the last decade and is at its lowest rate since 1963.  Santa Ana is the safest city among the 50 most populated cities in the United States, and the Santa Ana Police Department has gained national recognition for its leadership on community-oriented policing. Mayor Pulido has focused on recruiting and retaining a highly skilled police force and led the City’s efforts that resulted in the construction of a new state-of-the-art police facility in 1997.  As part of his public safety commitment, the Mayor is a strong advocate of after-school programs such as Project Pride, and has sought to improve our City parks and recreation programs by leveraging State and Federal grant opportunities.

Mayor Pulido represents Santa Ana on state and regional issues such as transportation and has served on the Orange County Transportation Authority since 1997 where he is a leader in promoting local street and road improvements and advocating for transit alternatives.  He also currently serves on the Governing Board of the South Coast Air Quality Management District (AQMD), which is responsible for air pollution control and clean air standards to protect public health.  In 2003 Governor Davis, and Governor Schwarzenegger appointed the Mayor to the California State Teacher’s Retirement System Board.  Other leadership positions include his recent appointment as the Chair of the Energy Committee within the U.S. Conference of Mayors, a national organization dedicated to advocating public policy initiatives and funding programs to benefit cities. He is also a board member of the Fullerton Community Bank, Great Park Corporation, Pacific Symphony, Discovery Science Center, the UCI Foundation, and the Bowers Museum President’s Advisory Council.

Mayor Miguel Pulido was born in Mexico City in 1956.  He holds a Bachelor of Science Degree in Mechanical Engineering from California State University, Fullerton.  He and his wife, Laura, are the proud parents of two sons, Miguel Robert and David Andrew; and a daughter Isabel Soledad.