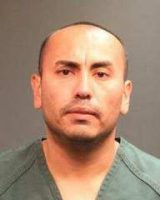 On 9-21-2016 at approximately 7:45 p.m., officers were finishing up a call for service in the area of 1400 North Cabrillo, when they recognized a vehicle reportedly involved in a series of commercial burglaries. The officers conducted a traffic stop on the vehicle.

When the driver exited the vehicle the officers recognized him as Alberto Sierra the wanted suspect involved in the burglaries to the Mexican Consulate as well as several other recent commercial burglaries around the city. Sierra was taken into custody without incident.

Sierra was transported to the Police Department where he was interviewed by Detectives and booked into the SAPD Jail on five counts of Commercial Burglary. Detectives continue to investigate additional burglaries they believe the suspect committed.