A violent suspect died after being arrested by the SAPD 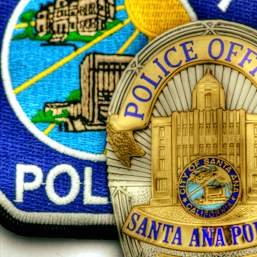 Upon arrival, officers encountered a hostile and combative male with visible injuries to his hands and arms. While attempting to de-escalate and place the male into custody, the male engaged in a violent confrontation with the officers. During their efforts to restrain the male, officers used force to place him into custody.

The male was subsequently placed under arrest for several felony offenses. Orange County Fire Authority paramedics treated the male at the scene for his injuries and transported him to Orange County Global Medical Center. This morning at 8:55 a.m., medical staff pronounced him deceased.

Per Santa Ana Police Department Policy, Santa Ana Homicide Detectives, Santa Ana Internal Affairs Unit, and the Orange County District Attorney’s Office are conducting concurrent independent investigations into this incident. The City of Santa Ana, City Attorney’s Office, has also assigned a Senior Assistant City Attorney to review this incident. The decedent’s name is not being released pending notification of next of kin by the Orange County Coroner’s Office.