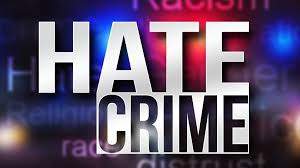 SANTA ANA, Calif. – A 40-year-old man has been charged with a hate crime and felony vandalism of a place of worship for using a gallon-sized paint can and paint to vandalize a mosque in Westminster.

He faces a maximum sentence of six years in prison if convicted on all counts.

On March 30, 2022, an employee at the Al Noor Foundation Mosque in the 14500 block of Goldenwest Street in Westminster saw a man, later identified as Martinez, try to break one of the mosque’s windows. Martinez is also accused of hitting the mosque’s front door with a gallon-sized paint can and then throwing paint onto one of the windows.

A Westminster police officer stopped Martinez as he walked near the mosque. Martinez had paint on his clothes and hand and told the officer that the mosque’s God had disrespected his God.

Martinez is currently being held without bail at the Theo Lacy Facility in Orange.

“Houses of worship are sacred places that should be safe havens from hate and violence,” said Orange County District Attorney Todd Spitzer. “Today, Muslims across the world begin celebrating Ramadan, a month of fasting, prayer, and reflection. Those celebrations must be able to go on uninterrupted and without the fear of someone trying to deface a house of worship. No one has the right to take that serenity from another person and the Orange County District Attorney’s Office will do everything we can to hold haters accountable and protect the rights of everyone to worship in peace.”