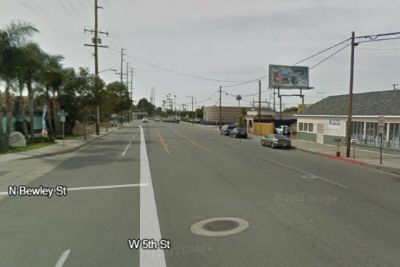 Witnesses were able to provide a vehicle description and license plate. Santa Ana police officers located the suspect vehicle and suspect at 1300 N. Clinton. The suspect was taken into custody and it appears DUI is possibly a factor.

The child was transported to UCI and has since succumbed to his injuries. Traffic has responded and is handling the investigation. Sgt. Smith is the scene supervisor.

UPDATE: “Authorities identified on Thursday a 3-year-old boy struck and killed by a driver who authorities believe was intoxicated and unlicensed as Darwin Almeida,” according to the O.C. Register.

“The information led police to arrest Angel Alberto Cruz Perez for investigation of gross vehicular manslaughter while intoxicated and other possible charges,” according to the San Francisco Chronicle.

« Matt Harper warned not to campaign at the County – what about Tom Daly?
City of Santa Ana to consider an ordinance to ban sex offenders from parks? »