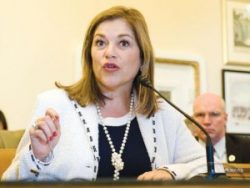 The left-leaning website Alternet has started a petition urging President Barack Obama and members of Congress to condemn yesterday’s Israeli attack on an aid flotilla headed to Gaza. At least ten people on board the lead vessel Mavi Marmara were killed in the assault that took place in international waters and targeted a convoy stocked with humanitarian aid headed for the coastal Gaza strip. Worldwide condemnation has followed in the aftermath and so far the White House has only issued a statement expressing “deep regret at the loss of life… and concern for the wounded, many of whom are being treated in Israeli hospitals.” According to the White House, “The President also expressed the importance of learning all the facts and circumstances around this morning’s tragic events as soon as possible.”

In the halls of Congress, the attack on the flotilla aimed at breaking the siege of Gaza that has been imposed on the territory since 2007, has already become an issue in a primary race between Representative Jane Harman and her Progressive challenger Marcy Winograd. The Blue Dog Democrat has chided her opponent’s stances on Israel and Palestine before, but has so far only offered silence in response to the current crisis. In complete contrast, Winograd, as a founder of LA Jews for Peace, issued an immediate statement on her website calling for “an international investigation into the Israeli military’s use of deadly force” and urging Congress to “immediately pass a resolution supporting such an investigation.”

Should petitions and pressure bring the issues at hand before Congress, would Orange County’s own Blue Dog Democrat Loretta Sanchez support such a resolution?