Will anti-police views doom Sarmiento, Tinajero and their allies on Nov. 8? 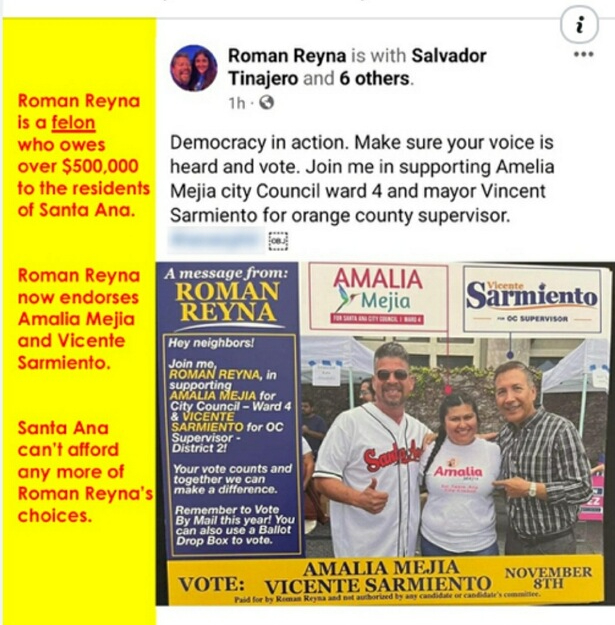 Santa Ana Mayor Vicente Sarmiento opted not to run for Mayor again this year. His ally Sal Tinajero is running for Mayor in Sarmiento’s stead while Sarmiento is running for the OC Board of Supervisors. Unfortunately for Sarmiento and Tinajero their anti-police agenda is set to backfire on them as California voters are increasingly upset with rising crime in our once Golden State.

Both Sarmiento and Tinajero are backed by Santa Ana City Councilman Johnathan Ryan Hernandez – who by his own admission grew up in a family dominated by gang members and then ousted former Councilman Juan Villegas, who just retired this year from the OC Sheriff’s Department.

Hernandez has a safe seat this year and is not up for reelection. He has recruited several like-minded local political candidates including Benjamin Vazquez in Ward 2, Amalia Mejia in Ward 4 and Manuel “Manny” Escamilla in Ward 6. If these candidates are elected there is little doubt that they will quickly act to defund the Santa Ana Police Department.

Sarmiento and Hernandez both called police officers murderers after Hernandez’ cousin, Brandon Lopez, was shot and killed in Santa Ana by members of the Anaheim Police Department. Lopez had led officers on a multi-city pursuit, in a car he stole from his girlfriend, then spent hours in the car, visibly taking drugs, before running out of the car with a black object in his hand, prompting the shooting. Lopez of course had a very long criminal record – but Sarmiento and Hernandez did not blame him for his criminal actions, instead piling on the police officers who were trying to protect the community.

Sarmiento and Hernandez are now pushing to allow criminals to be appointed to the Santa Ana Police Oversight Commission. The SAPD, predictably, is asking that the City Council ordinance that will launch this new Commission include background checks of prospective commissioners.

Sarmiento and Hernandez refer to these prospective criminal commissioners as “Justice Impacted.” But would many residents support such a ridiculous notion?

A poll conducted in February found that that crime and homelessness are key issues for California voters and that Gov. Newsom’s approval rating has dropped, according to Cal Matters. Voters also gave Newsom low marks for handling eight out of ten major issues facing the state, with 66% rating his response to homelessness as “poor” or “very poor” and 51% saying the same about his approach to crime and public safety.

Newsom is of course backing Sarmiento. But not one law enforcement union is supporting Sarmiento. Instead they are all backing his progressive challenger, Garden Grove City Council Member Kim Bernice Nguyen, who also happens to be of Latin and Vietnamese heritage.

Sarmiento, Tinajero and their allies should be very nervous about the result of this year’s Primary Election that saw liberal voters in San Francisco recall their pro-criminal District Attorney, Chesa Boudin, and their entire School Board. Asian voters in particular are fed up with Democrats who are soft on crime.

Two-thirds of registered voters in California believe crime has risen in their neighborhoods, according to the L.A. Times, a very liberal newspaper.

Proposition 47, the 2014 voter-approved ballot measure that Newsom supported, reclassified some felony drug and theft offenses as misdemeanors and raised from $400 to $950 the amount for which theft can be prosecuted as a felony. Two years later, California voters approved Proposition 57, a parole overhaul measure that increased good-behavior credits, allowing prisoners to be released earlier. (Source: L.A. Times).

With Santa Ana awash in crime, homelessness, gangs and drug dealers and users it would not be surprising to find out that our residents are also fed up with crime – and won’t be voting for anti-police candidates like Sarmiento, Tinajero and their allies.

Tinajero in particular has an uphill battle as he is one of three men vying to replace Sarmiento as our next Mayor. The only woman running, Valerie Amezcua, worked in law enforcement for over 25 years, at the OC Probation Department. She has the support of law enforcement and manages to be both progressive and anti-crime.

Both Tinajero and Sarmiento have also been championed of late by convicted felon Roman Reyna. They may come to regret that support after they lose on Nov. 8.