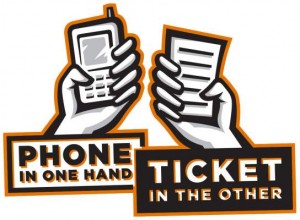 Santa Ana, CA – As part of April’s Distracted Driving Awareness Month campaign, the Santa Ana Police Department will be actively ticketing those texting or operating hand-held cell phones on April 3rd, 8th, 17th and 22nd. Drivers who break the law and place themselves and others in danger will be cited with no warnings. The current minimum ticket cost is $161, with subsequent tickets costing at least $281. Last April, over 57,000 tickets were written statewide for texting and hand-held cell use. There were nearly 450,000 convictions in 2012. Whether it’s a ticket or a crash, as the campaign theme states, “It’s Not Worth It!”

Distracted driving is a serious traffic safety concern that puts everyone on the road at risk. In recent years, hundreds have been killed and thousands seriously injured in California as a result of collisions that involved at least one driver who was distracted. Nationally, an estimated 3,331 died in 2011. As a result, law enforcement across the state, including the Santa Ana Police Department are cracking down on cell phone use and texting. This April will see over 270 local agencies plus the CHP conducting zero tolerance enforcements.

Drivers who use hand-held devices are four times as likely to get into crashes serious enough to injure themselves. Younger, inexperienced drivers under 20 years old have the highest proportion of distraction-related fatal crashes. In addition, studies show that texting while driving can delay a driver’s reaction time just as severely as having a blood alcohol content of a legally drunk driver.
Studies also show that there is no difference in the risks between hands-free and hand-held cell phone conversations, both of which can result in “inattention blindness” which occurs when the brain isn’t seeing what is clearly visible because the drivers’ focus is on the phone conversation and not on the road. When over one third of your brain’s functioning that should be on your driving moves over to cell phone talking, you can become a cell phone “zombie.”
To avoid a distracted driving ticket or crash, Santa Ana Police offers drivers the following tips:

One thought on “The SAPD will be looking to bust those who text while driving, in April”