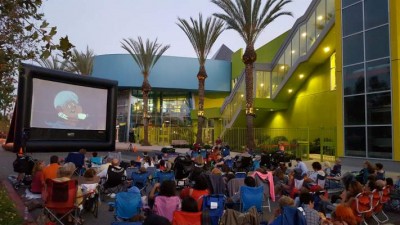 Families were invited to grab their detective gear for a special evening of sleuthing with Sherlock Holmes. On Friday, July 31 Discovery Cube Orange County hosted ‘Sherlock Family Night at the Cube’ offering exclusive access to Discovery Cube Orange County, including its newly expanded campus and the world-class traveling exhibit The International Exhibit of Sherlock Holmes. Plus, families enjoyed an outdoor showing of The Great Mouse Detective under the stars.

The International Exhibit of Sherlock Holmes is open at Discovery Cube OC for a limited time, through September 7. Visitors of this world-class exhibit making its California debut can learn how Sherlock Holmes, a scientific expert, used seemingly trivial observations of clues others missed to solve the most puzzling of mysteries. This 10,000 square-foot “who done it” exhibition features original manuscripts and artifacts, investigative tools, and crime-solving opportunities. Guests will be transported back into Victorian London and given a detective’s notebook to use throughout the exhibition to help solve a riveting crime.