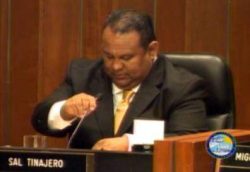 Another question this week will be if Councilman Tinajero also cares about city worker jobs, and whether he or Councilman Vincent Sarmiento who skipped the last vote, will step up to stop the possible layoffs at the city jail. Big week and hope things get better soon!

Don’t let city workers down Councilman Tinajero, you don’t really want to live up to the name that some people have already created for you, “Pink Slip Sal”. 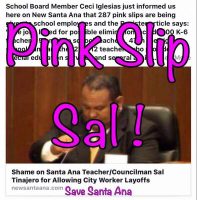 3 thoughts on “SAUSD video says pink slips by March 15. When will Santa Ana Teacher/Councilman Tinajero say when city jail pink slips might be sent out?”