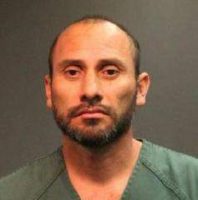 Charges: One count of Attempted Murder, Multiple counts of Assault with a Deadly Weapon

Santa Ana PD Homicide Detectives obtained information that suspect Jose Luis Trujillo was at a residence in the City of Garden Grove. Based on the violent nature of suspect Trujillo’s crime, SAPD SWAT was called upon to serve the arrest warrant for the attempted murder and multiple counts of assault with a deadly weapon.

Suspect Trujillo was taken into custody without incident and booked into SAPD Jail for multiple charges.

THIS SUSPECT SHOULD BE CONSIDERED ARMED AND DANGEROUS.

On 1/12/2018, at approximately 7:20am, officers responded to the 2100 block of South Orange reference a shooting just occurred. Victim was transported to local trauma center where he currently is in stable condition. Investigation revealed that suspect Jose Luis Trujillo and the victim, who are neighbors were involved in a verbal altercation. The suspect retrieved an unknown type rifle from his residence and shot the victim.

Suspect Jose Trujillo left the residence in his vehicle, a 2006 Black Scion CA License #7AIY437. A search warrant was executed at the suspect’s residence and multiple types of rifle ammunition were located. The weapon used in this crime is still outstanding. Suspect should be considered armed and dangerous.

Anyone with information on the whereabouts of this suspect/vehicle is asked to contact Homicide Detective Capacete at (714) 245-8506 or Orange County Crime Stoppers at 1-855-TIP-OCCS.

« Time to pull your children out of the SAUSD and send them to Tustin public schools
O.C. Social Services warns of a Facebook phishing scam that targets EBT users »