Notice: Undefined variable: remote_version in /home/newsantaana/public_html/wp-content/themes/ifeaturepro5/functions.php on line 417
 New Santa Ana | Poll – what should we do about the homeless problem in Santa Ana?
Santa Ana's top news & views blog 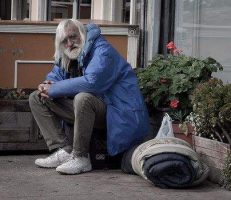 The issue they were upset about is the homeless problem at Santa Ana’s Civic Center. If you have not been out there recently you will be amazed and disgusted by the situation. Our Civic Center has essentially become a homeless camp with trash and human waste all over the place. The matter has been somewhat improved with the addition of more portable bathrooms but it is still far from optimal and is certainly not safe for those who have business at the Civic Center. 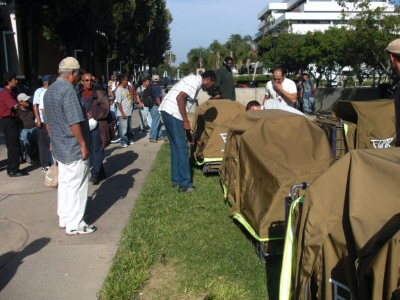 The County of Orange has stepped up their services in the past year, hiring a homeless czar and staffing a portable office at the Civic Center, where they talk to the homeless and try to connect them to local services and shelters.

The problem is that many of the homeless are exactly where they want to be. There are some who are drug and alcohol addicted and quite a few with mental problems, including U.S. military veterans suffering from PTSD.

John and Ken would prefer that the SAPD roust the homeless and drive them out of the Civic Center altogether. There are certainly laws on the books that would allow for this but all we would be accomplishing is moving the homeless from the Civic Center to another place – either in our city or elsewhere in Orange County.

So what else can we do? Be sure to fill out the survey below – you an choose up to three answers.

« Why is SAUSD School Board candidate Mark McLoughlin hiding his financial info from the public?
Ward 5 City Council candidate Juan Villegas to kick off his campaign on 9/7 »

One thought on “Poll – what should we do about the homeless problem in Santa Ana?”