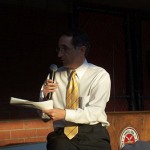 « Mail theft suspects arrested following vehicle pursuit from Laguna Hills to Downey
The MainPlace Mall and four other Westfield shopping centers sold in a $1.1B deal »