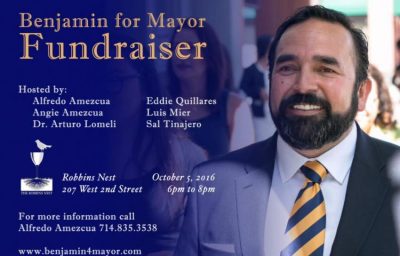 (Update – apparently the Vazquez campaign read this article. They have since fixed their broken campaign website)

As for the folks who are backing Vazquez, I am sure that Amezcua (daddy not daughter) is still mad at Pulido for not backing his failed Santa Ana Bank. But the fact that it failed is proof enough that Pulido was smart not to get behind what was a bad idea in the first place. And Lomeli is a Republican dentist who lives in wealthy Orange Park Acres, although he does maintain a dental practice in DTSA. Not sure what his issue with Pulido is, but he is consistently against Pulido as he backed Michele Martinez when she too ran against Pulido.

Honestly I can’t blame Amezcua (daddy) and Mier for backing Vazquez as he is on the record as being against hiring more cops. That will be good for Amezcua’s gangbanger criminal defense practice and Mier’s bail bond business. So backing Vazquez is good for their mutual bottom lines.

I realize that some in town are tired of Pulido, who has been in office forever. But it is hard for me to get excited about Vazquez, whose ideas are mostly nutty. How, for example, does he plan to pay for all that free housing for the poor?

Vazquez does not have a functional campaign website but you can learn more about him on his Campaign Facebook page.

« Construction and maintenance projects will disrupt Metrolink service in October
Friends of the S.A. Library book sale set for Oct. 7 and 8 »