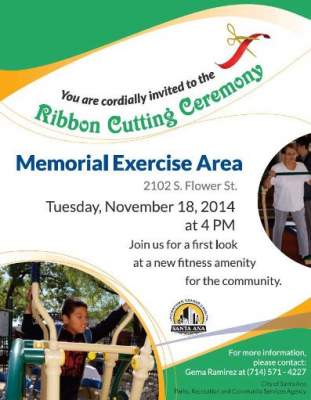 This new exercise area was made possible through a partnership with America on Track. America on Track provides programs that focus on leadership development, mentoring, fitness & nutrition, drug use prevention, and academic achievement for children and families in the community.

The event is open to the public. Join us for a first look at the new exercise area. 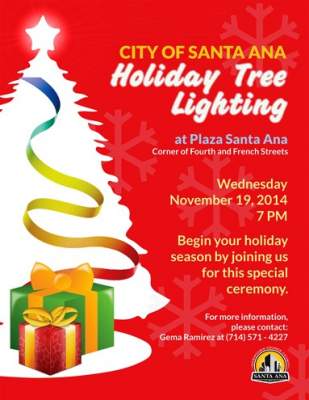 SANTA ANA, CA (November 10, 2014) – Join the City of Santa Ana as we kick off the holiday season with our inaugural Holiday Tree Lighting Ceremony on Wednesday, November 19, 2014 at 7 pm on the corner of Fourth and French Streets.

The event is free and open to the public. Light refreshments will be served. Bring the family and create new memories at this festive holiday celebration in the heart of Downtown Santa Ana. 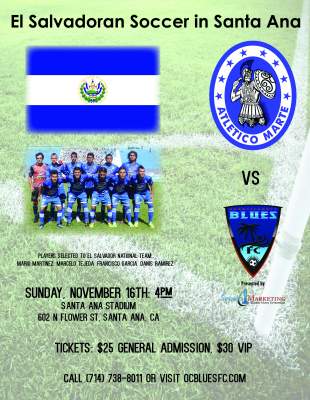 “Santa Ana has a large soccer playing population as well as a large contingent of Salvadoran people. We are excited to bring the OC Blues and our international opponent in front of this soccer loving community,” said Jon Spencer, the OC Blues General Manager.
CD Marte will be coming to Orange County with four Salvadorian National Team members on their roster: defender Mario Martinez, defender Marcelo Tejeda, forward Danis Ramirez, and defender Francisco Garcia, who just earned his first call up with the national team for their recent friendlies against Colombia and the Korea Republic.

Located in the heart of Orange County, the City of Santa Ana has a population of 330,000 and ranks as the fourth densest city in the nation. With access to four major freeways and a regional transit station, which services Amtrak and Metrolink, Santa Ana is a convenient place to live and work. Santa Ana is home to local, state and federal government offices including the District Attorney’s Office, Orange County Courts and the Ronald Reagan Federal Courthouse. The City is also home to major institutions and corporations including the Bowers Museum, Discovery Science Cube, the Santa Ana Zoo, Yokohama Tires, Crevier BMW (the #1 dealer in the Western United States for the past 25 years), First American Title Corporation, Behr paint, Ingram Micro and the Orange County Register. With its historic architecture, charming streets, live/work lofts, and vibrant restaurant scene, Downtown Santa Ana continues to be regarded by major news publications as one of Orange County’s best neighborhoods.