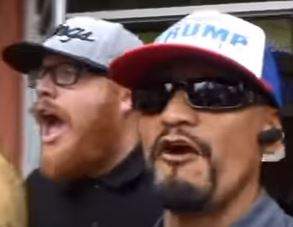 In the end a man was arrested for assault and two women who got into a fight were also detained, according to the O.C. Register.

The fight between the two women began just fifteen minutes after the workshop began, according to the SAPD. They were arrested and charged with assaulting and battering each other.

The organizers of the Townhall meeting eventually had to stop the event – so of course the attendees and the Trumpers ended up facing off again outside, in the parking lot. Then a man hit another person in the head with the pole of an anti-fascist flag, according to the SAPD. The police arrested the attacker for assault. His victim ended up with a small laceration.

Evidently the SAPD was forewarned about the Trumpers being there so they had ten police officers ready at the scene.