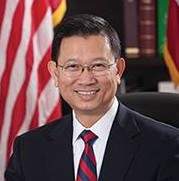 “Orange County is making it easier for people to get out and be active,” said Orange County Supervisor Andrew Do, who represents the First District on the Orange County Transportation Authority. “This multi-million dollar investment will make it easier for kids in Santa Ana to enjoy a recreational ride and help Garden Grove residents get to and from work.”

At its Monday meeting, the Orange County Transportation Authority Board of Directors voted unanimously to award approximately $19.5 million through its Bicycle Corridor Improvement Program. Local agencies will contribute an additional $2.7 million in matching funds.

Nearly half of the funds awarded Monday — a whopping $9.2 million — will support projects in Santa Ana, Westminster and Garden Grove. Among the Central Orange County projects that will receive funding from OCTA:

A strong advocate for active transportation, Orange County Supervisor Andrew Do has worked to expand the number of bike trails and walking paths in his First District – the county’s most densely populated district. At just 59 square miles, the First District is nearly five times more compact than the Fifth District.

“This investment will help ensure that everyone in Orange County has access to bikeways and pedestrian paths,” said Supervisor Andrew Do, who has made it one of his priorities to expand the number of recreational facilities and open spaces in the First District

To date, the Board has awarded $15.38 million in funding through the Bicycle Corridor Improvement Program to 31 projects. The goals of approved projects are to increase the number of biking and walking trips, enhance mobility and provide regional linkages to key destinations in Orange County.