Notice: Undefined variable: remote_version in /home/newsantaana/public_html/wp-content/themes/ifeaturepro5/functions.php on line 417
 New Santa Ana | The identity of a man who recently died in Orange has been confirmed
Santa Ana's top news & views blog 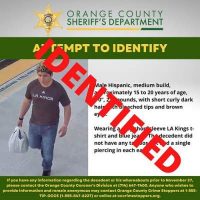 Family members identified the male decedent who recently died in Orange as Danny, 19, from Rialto.

Officials would not disclose the last name of Danny, who was a resident of Rialto, because the “coroner’s investigation is still ongoing.

The Rialto resident was seen Nov. 27 on security footage at the Metrolink Station on Chapman Avenue, where he paid cash for a train ticket to San Bernardino but missed the train.

The man died on December 1, 2021, at St. Joseph’s Hospital. The decedent was transported to the hospital on November 27, 2021, after being discovered unresponsive on the sidewalk near Chapman Ave. and Main St. in the city of Orange.