The Anaheim Police Dept. is conducting a DUI and Driver’s License Checkpoint on Friday night 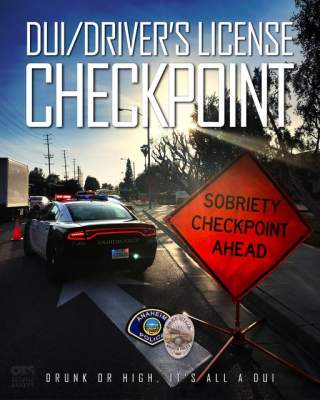 The Anaheim Police Department’s Traffic Unit will be conducting a DUI/Driver’s License Checkpoint this Friday (Nov 4), on Lincoln and East from 6:00 P.M. to 12:00 A.M. We emphasize the preventable nature of drunk driving, reminding everyone to drive sober or designate a sober driver.

On average, a DUI can set you back up to $13,500 in attorney’s fees, fines, court costs, lost time at work, higher insurance rates, car towing, and more. A DUI can result in losing your driver’s license and your car. Imagine trying to explain that to your friends, family and boss.

Remember – “DUI Doesn’t Just Mean Booze.” Some prescription medications or over-the-counter drugs may interfere with driving. While medicinal and recreational marijuana are legal, driving under the influence of marijuana is illegal.

Yes, by law we have to announce these. The deterrent and preventive effects of DUI checkpoints make them a proven resource in reducing the number of persons killed and injured in alcohol or drug-involved crashes. Funding for this program was provided by a grant from the California Office of Traffic Safety, through the NHTSA.