A drive-by shooting was reported in Santa Ana’s Park Santiago Neighborhood yesterday, at the 2500 block of Larchmont, at the corner of Joana, in broad daylight at 3:22 p.m.

Four SAPD vehicles responded to the scene as well as a department helicopter.

Two victims, allegedly age 18-25, were injured in the shooting and apparently made their way to a local hospital after getting shot.

The shooters were reportedly two Hispanic males. One of them was sitting on the corner with an “OC” tattoo on his lower right leg and the other was standing on the south side of Joana. The tattooed suspect shot once at two Hispanic males in a black Nissan 4-door coupe, apparently aiming at the driver. The passenger in the black Nissan leaned out and and apparently was able to fire one shot back.

The driver of the Nissan then drove his car from Joana, turned right, heading north, into Larchmont, where the passenger shot at the first shooter.

A neighbor said she heard a total of three shots. She saw two men hop into a gold-colored car that came into the area through Grovemont, from Lincoln.

Neighbors were shocked by the shooting as this type of crime is rare in the Park Santiago area. There are questions now as to whether or not any of the victims or suspects actually live in the area or were just passing through.

The SAPD did not issue a press release about the incident.

Many of the residents of the Park Santiago neighborhood opposed a proposed luxury apartment development at 2525 N. Main last year. The City Council flipped on that project and it was derailed. The dilapidated office building at that site is now a focal point of nefarious activities by drug users and transients who hang out at Santiago Park.

The SAPD released the first episode of their YouTube “For the Record: A Homicide Spotlight” program today, highlighting the murder of Victoria Barrios.

The For the Record video includes video images of the shooter and his friends in a newer four door red Chevrolet SUV, possibly a Tahoe, as they drove by and murdered Barrios.

The Barrios family was devastated by this senseless murder. Neither the victim nor her friends were gang members.

The Barrios family has erected billboards all over the city in an attempt to encourage anyone who knows who the shooter might be to step forward.

A year after the murder that shooter is still running free in our city and we still don’t know who he is.

The SAPD For the Record program will be produced monthly to draw attention to unsolved homicides and cold case investigations where the community’s help is needed to bring suspects to justice. Subscribe to the SAPD’s YouTube channel here.

Our Facebook page readers reported a shooting last night at the Townsend apartments by Raitt and McFadden. They were right!

As it turned out SAPD police offers were conducting proactive patrol checks in the Townsend neighborhood at the time and they witnessed a drive-by shooting occur.

The police immediately pursued the suspects and of course they sped off.

The suspects led police on a short pursuit following the shooting and fled on foot, but were ultimately found by police in the 2000 block of Myrtle Street after officers set up a perimeter, according to the O.C. Register.

They were taken into custody. An assault rifle was also recovered.

No victims were located that may have been hit by the gunfire. 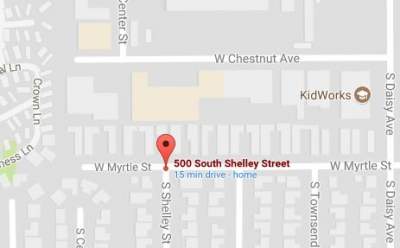 On Thursday, August 24, 2017 at approximately 10:01 PM, the Santa Ana Police Department responded to a report of a shooting at the 500 block of South Shelley Street in the city of Santa Ana. Upon arrival, Officers found an adult male victim suffering from multiple gunshot wounds. Orange County Fire Authority Paramedics responded. Medics transported the victim to a local trauma center where doctors declared him deceased at 1:37 AM. END_OF_DOCUMENT_TOKEN_TO_BE_REPLACED 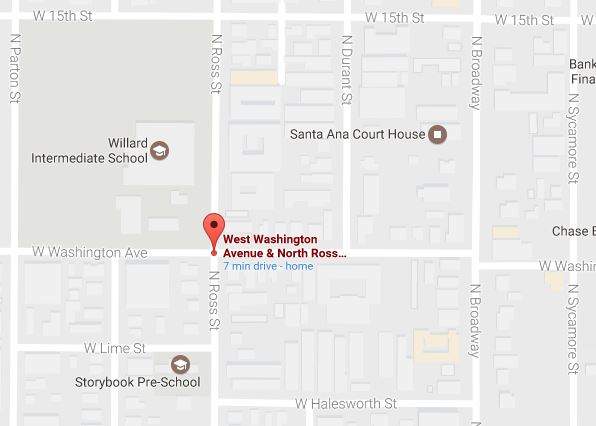 Shooting near Washington and Ross Streets in Santa Ana

Yesterday, on January 3, at about 8:30 p.m. a resident reported to the SAPD that he saw the driver of a vehicle shoot multiple times at a male Hispanic walking near the corner of Washington and Ross Streets, according to SAPD case number: 17-00252.

No victim was located. END_OF_DOCUMENT_TOKEN_TO_BE_REPLACED

Santa Ana is ending the year with a violent bang. This morning at about 4 a.m. a 55-year old man who was delivering newspapers noticed that he was being followed by another vehicle. The victim pulled over to the side of the road at 1700 West Occidental and then the occupant of the suspect vehicle fired a gun at him multiple times, hitting him once in his upper body, according to SAPD Case number 16-33963.

The victim was taken to a local hospital for treatment.  END_OF_DOCUMENT_TOKEN_TO_BE_REPLACED

The victim was shot at about 11:20 a.m., in broad daylight, as he was riding his bike on the eastbound sidewalk along South Raitt Street. The shooter pulled up in his car and shot the victim, according to the SAPD. END_OF_DOCUMENT_TOKEN_TO_BE_REPLACED

Two men were wounded Monday night in an apparent gang-related shooting in Santa Ana, according to the O.C. Register.

The shooting happened at about 8:30 p.m., at the 3500 block of West 11th St., according to the SAPD. END_OF_DOCUMENT_TOKEN_TO_BE_REPLACED

A 17-year-old boy was the victim of a drive-by shooting at a Santa Ana bus stop on Friday night, according to the O.C. Register.

The shooting happened at a bus stop on South Fairview Street, just north of West McFadden Ave., at 8:33 p.m. The teen was sitting at the bus stop when he was struck by a bullet fired from a passing vehicle.  END_OF_DOCUMENT_TOKEN_TO_BE_REPLACED

The SAPD did not report any details. SAPD police officers were only told that people had heard shots in their neighborhood. END_OF_DOCUMENT_TOKEN_TO_BE_REPLACED

Le was driving with his friends, westbound on West Edinger, when a light-colored compact vehicle full of gangbangers pulled up next to them.  END_OF_DOCUMENT_TOKEN_TO_BE_REPLACED

Another day, another drive-by shooting, as a man was injured in an attack the SAPD believes was gang-related, on Thursday night just after 10:15 p.m., according to the O.C. Register.

The drive-by shooting happened at the intersection of South Birch Street and West Chestnut Ave.

A male victim was shot once.  He was walking in the area when he saw a vehicle that may have been gray in color. He heard the sound of gunshots and felt pain. END_OF_DOCUMENT_TOKEN_TO_BE_REPLACED

Yet another drive-by shooting happened in Santa Ana early today, just after 2 a.m., at the 4600 block of West Melric Drive, according to the O.C. Register.

Two men and a boy were wounded by the attack, which took place just north of Heritage Elementary School and Heritage Park.   END_OF_DOCUMENT_TOKEN_TO_BE_REPLACED 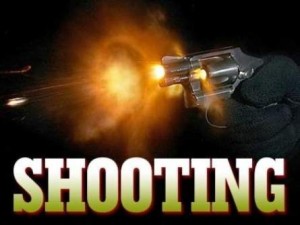 The victim was walking nearby on Civic Center Drive when multiple shots were fired from a passing vehicle. The SAPD suspects the shooting was possibly a gang-related attack. END_OF_DOCUMENT_TOKEN_TO_BE_REPLACED

An 18-year-old Latino was shot on Saturday night, at around 8:38 pm, in the 300 block of South Birch St., in Santa Ana, according to the O.C. Register.  The SAPD described the incident as a possible drive-by shooting.

SAPD police officers found the victim in an alley and he was taken to Orange County Global Medical Center, where he was in stable condition. END_OF_DOCUMENT_TOKEN_TO_BE_REPLACED