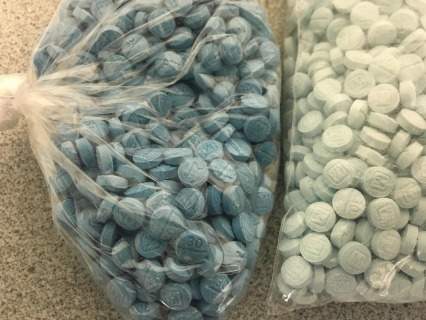 SANTA ANA, Calif. – Orange County District Attorney Todd Spitzer announced today his prosecutors will now be able to charge convicted drug dealers with murder if they manufacture or sell drugs, including fentanyl, and someone dies as a result. District Attorney Spitzer was joined by Riverside County District Attorney Mike Hestrin and Drug Enforcement Administration (DEA) Deputy Special Agent in Charge Curt Fallin along with a coalition of law enforcement leaders and grieving parents who have lost children to fentanyl poisoning to announce the change in how drug-related deaths will be handled by California’s third-largest prosecutor’s office as well as law enforcement agencies across Orange County.

“These are not overdoses. These are murders,” said Orange County District Attorney Todd Spitzer. “These dealers are essentially handing a loaded gun to unsuspecting victims knowing that they will probably die and they don’t care. Fentanyl is cheap, it’s easy to get, and it’s killing people who had no idea they were taking it. I refuse to let these drug dealers get away with murder. No parent should have to pick out their child’s casket or think about what their headstone should read. Many of these teenagers and very young people are dying because they thought they were buying drugs to ease anxiety and instead drug dealers sold them a fatal dose of fentanyl. Not a single drug on the street should be considered safe. It only takes one pill. One time.”

To confront this deadly epidemic, the Orange County District Attorney’s Office and our law enforcement partners are also taking proactive measures to educate and prosecute drug offenders who have or may traffic substances contaminated with Fentanyl and fentanyl analogues.

The Orange County District Attorney’s Office has adopted a policy to administer an advisement in qualifying cases to educate offenders about the dangers of Fentanyl and related substances.

The advisement is similar to the Watson advisement which California law requires be given to drivers convicted of driving under drugs or alcohol that warns that if the driver drives under the influence again and kills someone, they can be charged with murder.

“For the past five years my department has been sounding the alarm on fentanyl,” said Orange County Sheriff Don Barnes. “I have sponsored legislation to address disparities in the law by increasing the penalty for those trafficking this deadly substance. Unfortunately, the majority of our legislators have not been willing to enact this commonsense proposal. In an effort to address this inaction, my department has begun issuing advisements to all those arrested for selling narcotics. The advisement states that if a dealer sells, furnishes, or distributes drugs to someone, and that person dies as a result of using the drugs, they can be charged with murder. The gravity of this advisement makes clear that those engaged in furthering the drug epidemic will face consequence for their careless treatment of life.”

Fentanyl and its analogues are regularly used in drug-trafficking due to their low cost and potency. They often lead to deadly consequences.

“These drug dealers, these purveyors of death, are well aware of the poison they are handing out to your friends, your neighbors, your children, your children’s friends — your family,” said Matt Capelouto, whose 20-year-old daughter died from fentanyl poisoning two days before Christmas 2019. “They make a conscious decision to sell a potentially life-ending, fake pill to a human being without regard for the repercussions. We have the opportunity to create real accountability for the actions of drug dealers that are literally murdering thousands of Americans.”

According to the Centers for Disease Control and Prevention, people under the age of 50 are more likely to die from drugs than any other cause including heart disease and cancer. Many of these deaths are young people who believed they were taking drugs like Oxycontin, Xanax and Percocet and instead were unknowingly supplied a fatal dose of fentanyl.

“These drug dealers are preying on unsuspecting individuals and filling their pockets with cash, while families are left with the devastating consequences,” said Drug Enforcement Administration (DEA) Deputy Special Agent in Charge Curt Fallin. “Fentanyl overdoses have ripped through communities not just in Orange County, but nationwide. We are committed to doing everything we can to save lives and stop the deadly surge of drug overdoses. In the meantime, I hope that Californians will spread the word that one pill can kill.”