On 01/28/2016, based on information obtained from community members seeing the media stories and based on a tip received from Orange County Crime Stoppers, SAPD Detectives were able to identify, locate and arrest Hernan Sanchez at his place of employment. Detectives believe Sanchez is responsible for a series of robberies that took place at multiple 7-Eleven locations throughout Orange & Los Angeles Counties dating back to September of 2015. Sanchez has been positively identified in two Santa Ana cases. Sanchez was booked into the SAPD Jail and is being held on $100,000 bail.

This remains an ongoing investigation, anyone with additional information about suspect Sanchez or the Robbery Series is asked to please contact SAPD Robbery Unit/ Detective R. Ribeiro at 714-245-8361, Rribeiro@Santa-Ana.org, or Orange County Crime Stoppers at 1-855-TIP-OCCS. 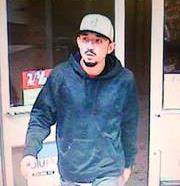 Since August 27, 2015, the photographed suspect has robbed four separate 7-Elevens in the Orange County area. The suspect walks in and selects an item from the cooler. When the suspect walks to the counter to pay for the item, he brandishes a handgun and demands the money from the cash register.