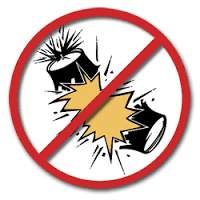 It’s the 4th of July which means when the sun goes down it will be total mayhem again, as it is every year, here in Santa Ana. This does not mean folks in town love our country. It means they are anarchists and they don’t give a damn about the rule of law.

Although lighting illegal fireworks is a crime a lot of folks in Santa Ana do it. And that includes a lot of white residents. I recall last year watching a neighbor in my Park Santiago neighborhood unloading a pile of illegal mortars from the trunk of his shiny black Tesla. I am sure that scene will be repeated tonight, all over town.

Playing with illegal fireworks is an incredibly stupid idea – but don’t take my word for it. Fireworks were involved in an estimated 9,100 injuries treated in U.S. hospital emergency departments during calendar year 2018 (95 percent confidence interval 7,000–11,100). The estimated rate of emergency department-treated injuries is 2.8 per 100,000 individuals in the United States, according to the CPSC.

Here are some more fun facts about illegal fireworks:

There is a free 4th of July event today at Centennial Park. Click here for details.