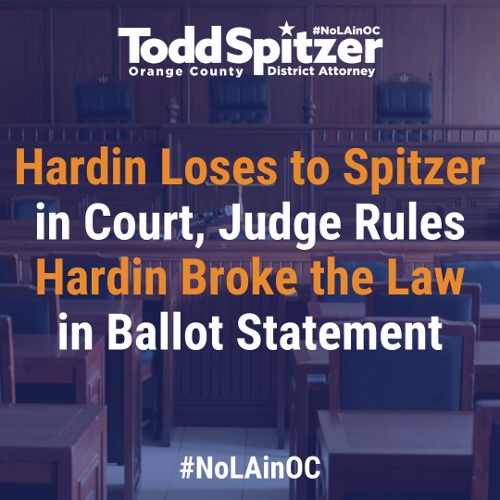 (ORANGE COUNTY, CA) – Today, an Orange County Superior Court judge ruled in favor of Orange County District Attorney Todd Spitzer in his challenge of Pete Hardin’s unlawful ballot statement. As a result, an entire portion of Hardin’s ballot statement has been removed because of its flagrant violation of the law.

Election law forbids candidates from attacking their opponents directly in their ballot statement. In Hardin’s case, the judge ordered an entire paragraph be deleted due to its blatant violation of this rule. Not only were the attacks illegal, but they were also demonstrably false.

“Pete the cheat is at it again, this time flagrantly breaking election law and then losing badly in court. This is the same unqualified and dishonest candidate who was kicked out of the military for adultery and then left the OCDA’s office in disgrace after supervisors caught him hitting on defendants and witnesses. Hardin’s disturbing pattern of behavior also includes covering up the shooting of a Naval corpsman, lying on his resume, and repeatedly lying to media and voters about his past conduct. The same thing happens everywhere Hardin goes – he breaks the rules, gets caught red-handed, and then falls flat on his face. What makes Hardin so dangerous is that he will literally do or say anything to get elected and turn Orange County into another Los Angeles or San Francisco.”