Is Council Member Vince Sarmiento’s law practice a sham? Who is he really?

Sarmiento would like us to believe that he is a family man who walks on water, but according to my insider that is a complete falsehood.

Sarmiento is a lawyer by trade but he does not appear to practice law very much. Instead his family appears to make a living via a network of nightclubs including Festival Hall, also known as El Festival, and El Carnaval. However the Sarmiento family has taken steps to insulate themselves since Sarmiento came to power back when he was appointed to the Santa Ana City Council, in January of 2007, according to his official bio.

Sarmiento’s California Bar Record says his full name is Vincent Flavio Sarmiento. It refers to a website, vfslaw.com which is not functional. Now tell me if this guy really has a law practice how in the world does the law practice operate with a non-functional website?

Vince’s bio says that he and his wife, Eva Casas-Sarmiento, run a law practice together. But her California bar record says she works for Disability Rights California. Except she is not listed in their staff directory. And the Bar Association says her email is eva.casas@yahoo.com. Vincent’s email address is listed as vincent@vfslaw.com. If they run a law practice together shouldn’t they have similar work emails? 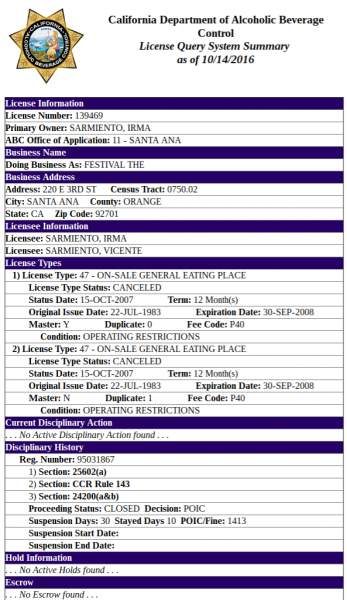 My tipster says that in reality the Sarmiento family still runs Festival Hall. They use Sanchez Bolanos as a proxy. It appears that after Vince got elected his family decided to do all of this in order to separate him from what is a very shady business.

According to Crimemapping.com, there is a lot of crime taking place around Festival Hall. But don’t take my word for it. Here is what a Yelper has to say about Festival Hall:

On many occasions, the party doesn’t stop at 2 a.m.. The club patrons go out to their cars and crank up their stereos and dance in the parking lot until residents come down and force them to leave or call the Police/Loft Security Patrol. The ones that aren’t dancing are hollering and yipping at the moon like crazed cowboys on a bender.

We reported in January that a 16-year old girl went missing after hanging out at Festival Hall. Our tipster says that it is common for minors to be allowed to enter Festival Hall – if they are girls.

Things are not much better at another Sarmiento family establishment, El Carnaval. They too are a hotbed of crime according to Crimemapping.com.

Our tipster also had some serious complaints about Festival Hall. He said his girlfriend would be happy to testify that the employees are paid in cash and that the establishment often fires female servers who get pregnant. Those are labor code violations of course. Paying folks in cash is done when an establishment does not have workers’ compensation insurance in place. And it is illegal to fire pregnant women. These are of course allegations but according to my tipster he has not been able to get any authorities to investigate what is going on at these businesses. He says that they always tell him the same thing – those businesses belong to Vince Sarmiento and his family.

If you have been watching Marvel’s Luke Cage television show on Netflix then all of this sounds very familiar. Shady nightclubs. Shady politicians. No bueno!

Is it possible that Vince really does have a law practice? Well the practice has a Facebook page. And of course it is devoid of any information. It is as empty as his suit.

This year voters have an alternative. Instead of voting for Sarmiento they can vote for family lawyer Jessica Cha. She has our endorsement. And she actually is a lawyer!

2 thoughts on “Is Council Member Vince Sarmiento’s law practice a sham? Who is he really?”