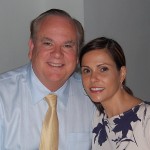 Lockyer, who is registered as an attorney with the state bar, is in fact the executive director of the Alameda County Family Justice Center, a nonprofit center for victims of domestic violence, sexual assault and abuse.

When I ran against her for the SAUSD School Board, back in 1998, I had to call her a liar at a candidate forum, when she unloaded a bunch of B.S. about me to the attendees.  She couldn’t speak Spanish to save her life, so I called her a “mentirosa,” which is Spanish for “liar.”
And here she is lying again in yet another campaign.
I always cringe when I see photos of Nadia and Bill.  He looks old enough to be her daddy!  It is pretty gross.
Nadia appears to be the “Lorri Galloway” of Alameda.  Galloway also runs a non-profit, in Anaheim, and is running for the Fourth District on the O.C. Board of Supervisors.  Galloway is a carpetbagger and other bloggers have ripped into her murky past finances.
It would be great to see the Lockyers get punked in Alameda!  I have no idea who else is running, but they surely must be better qualified than Nadia.