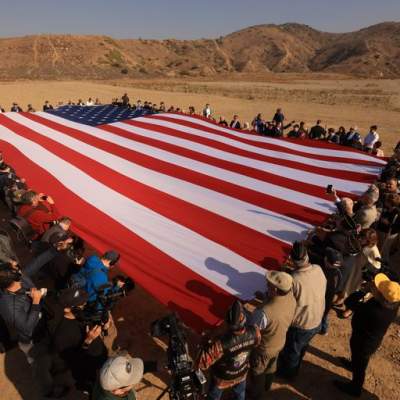 Anaheim, Calif. (December 8, 2021) – After nearly a decade of debate, the Orange County Board of Supervisors, with bipartisan support from local, state and federal representatives, celebrated the flagpole groundbreaking at the Veterans Cemetery site in Anaheim Hills. Over 150 Orange County veterans representing various groups attended to show their support. The site is over 280 acres, located off the Gypsum Canyon exit in Anaheim Hills.

Along with the flagpole groundbreaking, veterans presented a 60’X30’ American flag, which will publicly mark the future home for Orange County’s first-ever Veterans Cemetery.

The event involved special guests, including an invocation led by Elaine Brattain, Chaplain of the American Gold Star Mothers, a presentation of colors by Veterans of Foreign Wars Post 9934, Pledge of Allegiance by Bobby McDonald of the Orange County Veterans Advisory Council And a poem read by Bill Cook, Chairman of Orange County Veterans Memorial Park.

Supervisor Donald Wagner, Third District
“Today is a monumental day in Orange County history, as we break ground on behalf of over 100,000 OC Veterans and for our entire County. The men and women who served our great country deserve a dignified burial spot,” said Supervisor Don Wagner, Third District. “I am grateful we have strong bipartisan support from the local, state, and federal levels. Building a local cemetery for our hometown heroes is the right thing to do, and though it is long overdue, the right time is now.”

“In Orange County, tens of thousands of refugees like myself, other immigrants, and our children now enjoy our rights as Americans because of the sacrifices made on our behalf by U.S. armed forces,” said Chairman Andrew Do, First District. “We hold a special duty to honor their bravery, sacrifice, and service. It is only fitting to offer our veterans a proper resting place in our county. And no better location than the Gypsum Canyon Site in Anaheim.”

“It’s an honor to be with all my colleagues, elected leaders and veterans’ organizations to celebrate this milestone for the Veterans Cemetery,” said Vice Chairman Doug Chaffee, Fourth District. “I am so greatly looking forward to being here in the near future to celebrate all the milestones of this fabulous project to our brave men and women in the Armed Services.”

“I am so proud of the effort to finally bring a Veterans Cemetery to Orange County,” said Supervisor Katrina Foley, Second District. “Armed Service members deserve to have a final resting place. Our County remains committed to serving our Veterans by providing permanent supportive housing, more access to mental health services that address emerging issues such as increased suicides and assisting our Veterans as they return to the workforce. It is the least we can do.”

“So much time and effort has been done to get us to this stage in the creation of Orange County’s Veterans Cemetery,” said Supervisor Lisa Bartlett, Fifth District. “Orange County and our veterans are so very proud of this accomplishment for our brave men and women who are deserving of having a cemetery for them in their beloved county. Thank you to all who made this dream a reality.”

“Our veterans sacrificed everything to fight for us and protect the freedoms we hold so dear and we have to continue to fight for them,” said Orange County District Attorney Todd Spitzer. “It is an honor to stand here today – side by side with the Veterans Alliance of Orange County (VALOR) as they finally declare victory over the political gridlock that has stalled this project for far too long. These brave men and women refused to surrender and today their vision for Orange County’s Veterans Cemetery to serve as a final resting place worthy of our heroes is finally becoming a reality.”