Santa Ana, Calif. –Yesterday the Board of Supervisors voted to appoint Charlene Reynolds as the Director of John Wayne Airport.

“After conducting a wide recruitment, we’re pleased to welcome Ms. Reynolds as the new director of the Orange County airport,” said Chairman Doug Chaffee, Fourth District. “Her passion and commitment to aviation services will help us continue to elevate our passenger experience.”

An executive with over 20 years of experience in the public and private sectors, Charlene Reynolds is currently the Chief Commercial Officer with the Houston Airport System.

“John Wayne Airport is vital to Orange County’s economic growth and development, and I look forward to seeing JWA prosper with Ms. Reynolds at the helm,” said Vice Chairman Donald P. Wagner, Third District. “Her extensive aviation experience, plus her years of work in the public sector, will be valuable for the future of our community airport.”

“Orange County residents understand the quality of service and optimum travel experience that John Wayne Airport provides its patrons,” said Supervisor Andrew Do, First District. “Ms. Reynolds’ expertise in the aviation industry is a great addition to the John Wayne Airport team. I wish her great success as she takes on her new role as Airport Director.”

“For the last year, I’ve served as the district representative for the airport, and recently as a member of the hiring committee,” said Supervisor Katrina Foley. “Improving the quality of both internal and external community operations remain my priority. Ms. Reynolds impressed me with her earnest responses, hard work ethic, emphasis on collaborations with stakeholders, and breadth of knowledge on environmental and sustainable practices to clean up the airport and its impacts.”

Ms. Reynolds earned a bachelor’s degree in Management from the University of Phoenix and has a Master’s in Business Administration from the Keller Graduate School of Management of DeVry University.

“Given Ms. Reynold’s many years of experience in the public and private sector, I am confident she will ensure our award-winning airport continues to be amongst the finest in nation,” said Supervisor Lisa Bartlett, whose fifth district is home to John Wayne Airport.”

Ms. Reynolds previously served as the President of the National Forum for Black Public Administrators – Phoenix Chapter and was named a “Great 48” in 2020 by Phoenix Magazine. She was a Celebration of Women Honoree in 2018 and received the 2015 Jerome E. Miller Award from the City of Phoenix in 2015.

A business jet that took off from John Wayne Airport on Monday, Dec. 27, crashed in El Cajon, killing four people. The pilot was heard screaming in air-traffic control audio “Oh sh*t! Oh sh*t! Oh sh*t!” prior to the crash.

Here is a press release from the San Diego County Sheriff regarding the plane crash:

The San Diego County Sheriff’s Department continues to assist our partner law enforcement and fire agencies with a small plane crash in the unincorporated area of El Cajon.

The plane was scheduled to land at Gillespie Field in El Cajon.  At this time, we do not have information on where the plane was coming from or how many were on board. Firefighters were not able to find any survivors at the crash scene. In the County of San Diego, the Medical Examiner’s Office is the agency that rules on the manner or cause of deaths, as well as identification of the person/people once the family has been notified.

One home was damaged and power lines were knocked down in the area. No one was hurt on the ground. At this time, San Diego Gas and Electric (SDG&E) crews are on scene working to restore power to nearly 70 customers in the area. The American Red Cross will be providing assistance tomorrow morning, December 28 to residents who remain affected by the power outage.

Be aware that Pepper Drive will remain closed between Topper Lane and North 2nd Street through Wednesday, December 29 as it will take some time for the Federal Aviation Administration (FAA) and National Transportation Safety Board (NTSB) to process the scene. Please avoid the area if you can and plan accordingly if this is part of your commute.

If you have photos or videos of the plane crash, send them to witness@ntsb.gov.

Our thoughts and prayers go out to everyone affected by the plane crash. If you need to talk to someone or need mental health resources, call the County Crisis Line 24/7 at (888) 724-7240.

COSTA MESA (Nov. 8, 2021) – Heroes Hall Museum will reopen its permanent exhibit, The SAAAB Story, which chronicles the history of the Santa Ana Army Air Base, on Thursday, Nov. 11, with a special Veterans Day celebration. The air base’s location once included the land on which the OC Fairgrounds now sits, and Heroes Hall’s building is a renovated barracks from the base.

The exhibit first debuted when Heroes Hall opened in 2017 but has been updated with several new artifacts and memorabilia.

“The SAAAB Story is much more immersive now,” said Carol Singleton, Heroes Hall Supervisor. “It will help people better understand what the cadets went through while they were training here. Everything about the exhibit is connected to the Santa Ana Army Air Base.”

Other new sections include information about:

• Women, Latinos and LGBTQ service members in the military during World War II
• Letters from 8th graders who were sent to internment camps to their white classmates in Westminster
• German POWs who worked on the base picking oranges
• Tuskegee Army Air Field, which is where the Black airmen who would have trained at SAAAB were placed were it not for segregation
• Victory gardens, rationing and other campaigns led on the home front

“My favorite part is the personal stories of the cadets that graduated here,” Singleton said. “There are eight different cadet stories, each one extraordinary, and all eight went on to the war in either the South Pacific or the European theatre.”

The SAAAB Story is a permanent exhibit at Heroes Hall. Heroes Hall is open year-round, Wednesdays through Sundays from 10 a.m. to 4 p.m. Admission is free. The first-floor exhibit, Through Their Eyes: Artwork by Active Military and Veterans, will be on display until Jan. 20, 2022.

Join us for the SAAAB (Santa Ana Army Air Base) Exhibit Reopening Ceremony which will include an All-American Boys Chorus performance, Marine Corps birthday cake cutting, and kids activities.

This event is free in partnership with the Heroes Hall Veterans Foundation.

OC Fair & Event Center in Costa Mesa, CA, is home to the annual OC Fair and Imaginology. Year-round attractions include Centennial Farm, Table of Dignity, Heroes Hall and Pacific Amphitheatre. Throughout the year, events ranging from recreation shows to cultural festivals are held at the fairgrounds. 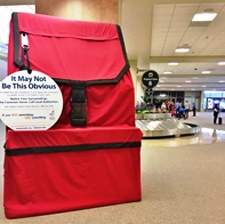 This season, JWA is thankful for its partnership with KeepOCSafe. Together, we encourage travelers to be aware of their surroundings and report questionable objects or activities. A Giant Red Backpack (pictured below) will be on display in the Riley Terminal throughout the holidays to remind passengers and visitors, “If You See Something, Say Something™.” END_OF_DOCUMENT_TOKEN_TO_BE_REPLACED 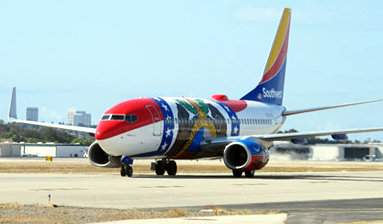 “We are fortunate to have a world-class airport right here in Orange County. JWA is beautiful, convenient and generates over six billion dollars in annual economic impact – it is a powerful engine that helps drive our economy,” shared Board of Supervisors Chairman Todd Spitzer. “That engine will be even more powerful come November with thanks to Southwest Airlines and the launch of new nonstop service to Kansas City and St. Louis.” END_OF_DOCUMENT_TOKEN_TO_BE_REPLACED 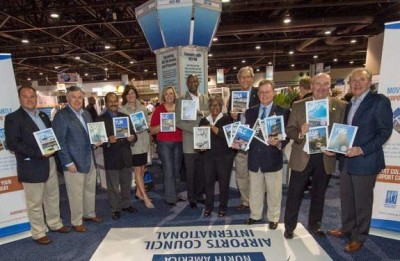 On Tuesday, May 5, JWA employees will distribute the new SNA trading card to passengers on selected flights. Two airports, Minneapolis-St. Paul and Salt Lake City, will hand out their own trading cards to passengers arriving from Orange County. JWA is encouraging passengers to take pictures of themselves with their SNA trading card and share them on social media using #AirportCards. END_OF_DOCUMENT_TOKEN_TO_BE_REPLACED 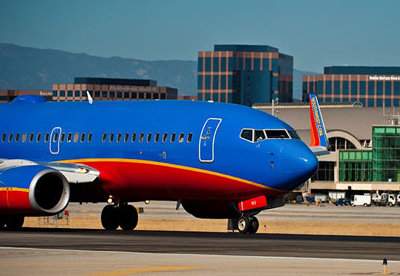 In anticipation of one of the most heavily traveled holiday periods, John Wayne Airport (JWA) offers travel tips to help passengers prepare for a safe and enjoyable holiday. Passengers traveling through JWA between Friday, November 21 and Monday, December 1 will experience higher-than-normal passenger traffic due to the Thanksgiving holiday.

This season, JWA is partnering with KeepOCSafe to encourage travelers to be aware of their surroundings and report questionable objects or activities. A giant red backpack will be on display in the Riley Terminal throughout the holidays to remind passengers and visitors, “If You See Something, Say Something.”

Tips for Passengers and Visitors: END_OF_DOCUMENT_TOKEN_TO_BE_REPLACED 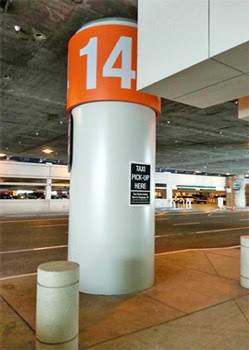 SANTA ANA, Calif. – John Wayne Airport (JWA) anticipates a busier-than-normal travel period from Thursday, August 28 through Tuesday, September 2 during the Labor Day holiday weekend. More than 145,000 passengers traveled through JWA during the same period in 2013 with the busiest travel days being the Friday before and Labor Day.

Visitors to JWA during this holiday period can check the Airport homepage, www.ocair.com, for real-time flight status and the most up-to-date construction activities around the Riley Terminal. Drivers are encouraged to exercise caution when navigating Airport roadways and to follow posted speed limits. END_OF_DOCUMENT_TOKEN_TO_BE_REPLACED

SANTA ANA, Calif. – John Wayne Airport (JWA) anticipates a busier-than-normal travel period from Friday, June 28 through Sunday, July 7 during the Fourth of July holiday. Passengers are reminded that fireworks are prohibited and should be left at home.

Visitors to JWA during this holiday period should be aware of ongoing construction activities around the Riley Terminal, exercise caution when navigating Airport roadways and follow posted speed limits. END_OF_DOCUMENT_TOKEN_TO_BE_REPLACED

The Lyon Air Museum is located at
19300 Ike Jones Road, in Santa Ana. 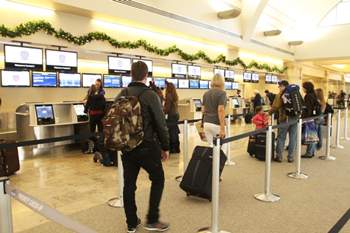 Travelers are encouraged to plan ahead during the busy holiday travel season.

SANTA ANA, Calif. – John Wayne Airport (JWA) anticipates a busier-than-normal travel period between December 21 and January 4, 2012. Last year, more than 440,000 passengers traveled through JWA during this period. To ensure a smooth visit to the Airport, passengers are encouraged to plan ahead and arrive at the Airport 1-½-to-2 hours prior to departure time for domestic flights, and 3 hours for international flights. END_OF_DOCUMENT_TOKEN_TO_BE_REPLACED

SANTA ANA, Calif. – In anticipation of one of the most heavily traveled holiday periods, John Wayne Airport (JWA) offers travel tips to help passengers prepare for a safe and enjoyable holiday. Passengers traveling through JWA between Friday, November 16 and Monday, November 26 will experience higher-than-normal passenger traffic due to the Thanksgiving holiday. The busiest travel days are expected to be Wednesday, November 21 and Sunday, November 25. END_OF_DOCUMENT_TOKEN_TO_BE_REPLACED