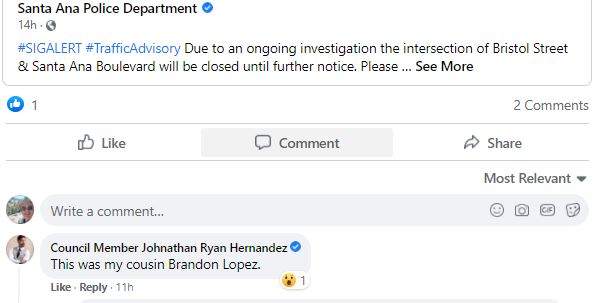 Hernandez commented about the killing on the Facebook page of the Artesia Pilar Neighborhood Association.

Lopez was wanted by the Anaheim Police for an armed robbery and was allegedly driving a stolen vehicle which was disabled after crashing into a railroad construction site in the area of Santa Ana Boulevard and Bristol Street.

Hernandez was groomed for public office by former City Councilman Roman Reyna, whose brother was involved in gangs an died in state prison. Reyna now runs a party supply rental company. Reyna had to resign from the City Council after being convicted by the OCDA for election fraud. Reyna still owes the County over $500K for those actions.