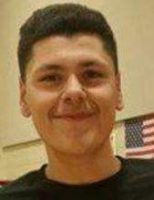 On Saturday, March 25, 2017, at 11:51 p.m., Santa Ana Police Department Communications received a call of a male down and bleeding in the area of 2302 W. St. Gertrude. Santa Ana Police Officers and Orange County Fire Authority personnel arrived on the scene and found the 15 year old male victim, Gonzalez, suffering from several gunshot wounds. Fire department personnel transported Gonzalez to an area hospital where he ultimately died.

Based on the initial police investigation, it appears that Gonzalez was walking in the area when he was shot. A dark colored vehicle was seen in the same area around the time of the incident.

The shooting was being investigated as possibly gang-related because it may have been a drive-by shooting and because of the area where it occurred. Gonzalez was known to be a member of a tagging crew but was not believed to be a gang member.

Gonzalez was an aspiring boxer according to the OC Weekly. His family has set up a Go Fund Me page here to help pay for his funeral. He left behind his Mom, Dad and 2 younger brothers.