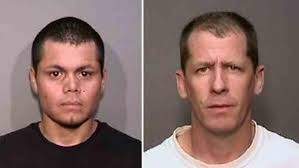 Advisory: TWO MEN TO BE ARRAIGNED ON INDICTMENT FOR SPECIAL-CIRCUMSTANCES MURDER IN COMMISSION OF KIDNAPPING AND RAPE OF FOUR WOMEN

SANTA ANA – Two men are scheduled to be arraigned tomorrow on an indictment for the special-circumstances murder in the commission of a kidnapping and rape of four women. Steven Dean Gordon, 45, and Franc Cano, 28, both of Anaheim, were indicted by the grand jury today Oct. 2, 2014.

They are each charged with four felony counts of special circumstances murder during the commission of rape, kidnapping, lying in wait, and multiple murders. They are also each charged with four felony counts of forcible rape. If convicted, they face a minimum sentence of life in state prison without the possibility of parole and are eligible for the death penalty. The defendants are both scheduled to be arraigned on the indictment tomorrow, Oct. 3, 2014, at 9:00 a.m. in Department C-5, Central Justice Center, Santa Ana.

One thought on “Two Anaheim men charged with murder, kidnapping and rape of four women”