SANTA ANA, CA (October 21, 2013) – The Santa Ana Public Library invites the community to the annual TeenSpace Haunted House at the Jerome Recreation Center and Santa Ana Central Library. These events are free and open to the public.

The Jerome haunted house will be open to the public on October 24th & 25th from 6-8pm. TeenSpace staff will be giving out free candy while supplies last. Community members are asked to line up along the south side of the Recreation Center facing the soccer field. The Jerome Recreation Center is located on 726 S. Center Street Santa Ana, CA 92704. END_OF_DOCUMENT_TOKEN_TO_BE_REPLACED 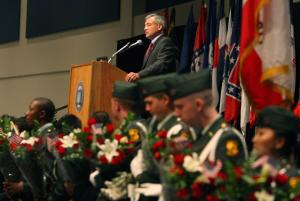 SANTA ANA, CA (July 10, 2012) – On Saturday, July 14, 2012, at 3:00 p.m. the Santa Ana Public Library will host Congresswoman Loretta Sanchez and Judge Frederick P. Aguirre during its weekly Teen Civics program. The program will consist of both the Congresswoman and Judge speaking to our public on the topic of ‘Making a Difference: Law, Politics, and Civil Engagement.’ The program will commence promptly at 3pm with Judge Aguirre speaking to the public and hosting a short question and answer session. Judge Aguirre has served as Superior Court Judge for the County of Orange since 2002. Following Judge Aguirre’s talk, Congresswoman Loretta Sanchez will speak to the youth and the public about being proactive in your community. She will speak from 3:30 – 4:00 p.m. Sanchez has been a Congresswoman for California’s 47th Congressional District since 1997. After the presentations both speakers are invited to sit in for TeenSpace’s weekly Teen Civics program where the participants will discuss issues related to the 1st Amendment and the Bill of Rights. END_OF_DOCUMENT_TOKEN_TO_BE_REPLACED