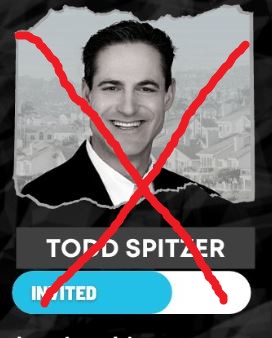 ORANGE, CA – Organizers of the first public debate for Orange County District Attorney have confirmed that Todd Spitzer has refused their invitation. All other candidates have confirmed their attendance for Monday’s debate, which will be held Monday, April 25th, from 6PM to 8PM. Members of the public and the media can register to attend here.

“With homicides at a 22-year high, homelessness at record levels, and with his administration devolving into a circus–it appears Todd Spitzer just figured out that defending his record is simply impossible,” said former Marine Judge Advocate Pete Hardin. “If he’s not up for a public discussion on the issues voters care about, he’s not up to the job of District Attorney.”

Pete Hardin has accepted all four debate invitations. The first debate will be held this upcoming Monday, April 25th, from 6PM to 8PM. Members of the public and the media can register to attend here.