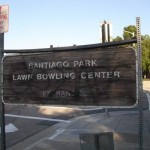 In 1935 and 1936 the 1st lawn bowling green in Santiago Park was constructed with funding from the Work Projects Administration (WPA) program, according to the Santa Ana Lawn Bowling Club’s website.

But where did lawn bowling get its start in the U.S.?

The first Lawn Bowling Green in the United States was reportedly built in Williamsburg, Virginia in 1632 (and a green still exists there behind the renowned Williamsburg Inn).  The second one was established in what is now called Bowling Green, Virginia in 1670. It is said that George Washington and Thomas Jefferson were avid lawn bowlers, according to the Coronado Lawn Bowling Club. They were also slave owners.

Folks today have mostly forgotten that California once ran amok with Confederates and pro-slavers.

Beginning in the early twentieth century and continuing into the twenty-first, Confederate memorial associations in California established more than a dozen monuments and place-names to the rebellion. They dedicated highways to Jefferson Davis, named schools for Robert E. Lee, and erected large memorials to the common Confederate soldier, according to the New Republic.

Southerners in fact came to California in droves, often with their slaves, starting in 1848, when they were drawn to the Golden State by the gold rush.

When the Civil War erupted between North and South in 1861, a wave of secessionist scares swept across the West. Los Angeles County was the epicenter of California disunionism. Hundreds of Southern-sympathizing Angelenos fled east to join Confederate armies, while an even larger number remained to menace federal control over the region, according to the New Republic.

Then the KKK came to Orange County.

By the mid-1920s, an estimated 2-4 million Americans had joined their local Klavern, in cities and towns all over America—not just in the South, but also in the West. One of the places where the KKK proved quite popular in the 1920s was Orange County, California, according to the Fullerton Observer.

Klan leaders and lecturers drew crowds in the thousands in Anaheim, Orange, and Fullerton. Apparently “the alien influence” was the primary cause of America’s difficulties, and a solution was “limitation or a complete halt to immigration.” Hmmm…doesn’t that sound familiar today?

The last major Confederate monument in California came down last August. It was a nine-foot granite pillar at the Orange County cemetery in Santa Ana. It was inscribed with the names of several Southern leaders, including Jefferson Davis and Robert E. Lee, who never even set foot on the Pacific coast. That cemetery in Santa Ana is by the way littered with Confederate grave markers to this day. The Confederates and the KKK were a big deal in Santa Ana back in the day!

By the time the Santa Ana Lawn Bowling Club started in 1935 the KKK had been revealed and dismantled in Orange County. But it is clear that lawn bowling is exactly what it appears to be – a tradition started by U.S. slavers. Those first Lawn Bowling fields built in Virginia were most likely constructed by slaves, who of course were not allowed to participate in the lawn bowling.

The Santa Ana Lawn Bowlers by the way still dress in white and red to this day.

For years I have tried to convince the City of Santa Ana to do something else, anything else, with the Lawn Bowling Center. Because the lot is composed of two fenced fields it would make an excellent dog park. But really anything else would be better. How about some basketball courts? Handball courts? A soccer field?