Notice: Undefined variable: remote_version in /home/newsantaana/public_html/wp-content/themes/ifeaturepro5/functions.php on line 417
 New Santa Ana | Robbers crash on the 5 Freeway and one of them runs to the MainPlace Mall
Santa Ana's top news & views blog 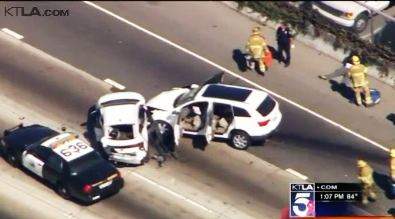 The driver refused to stop and led authorities on a pursuit that lasted about 30 minutes before crashing into a white Chevy Volt on the 5 Freeway near the Westfield MainPlace mall in Santa Ana, according to KTLA News.

One of the suspects initially fled the scene on foot but was taken into custody a short time later at Westfield MainPlace mall.  Three of the suspects were transported to a hospital with non-life threatening injuries. The innocent driver in the other car was not injured, according to ABC7.