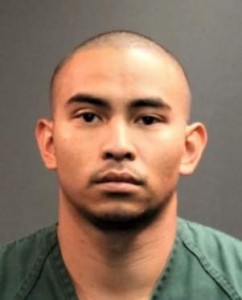 SANTA ANA, Calif. – A felon who had two of his prior felony convictions reduced to misdemeanors under Proposition 47 (Prop 47), which resulted in his release from custody, was charged today with shooting his firearm at police officers while leading them on a chase. Jimmy Hoang Troung, 28, Santa Ana, is charged with two felony counts of attempted murder on peace officers, two felony counts of assault with a semiautomatic firearm on peace officers, one felony count of being a felon in possession of a firearm, one felony count of evading peace officers while driving recklessly, and sentencing enhancements for the use of a firearm. If convicted, Troung faces a maximum sentence of life in state prison. He is being held without bail and is expected to be arraigned tomorrow, Tuesday, Nov. 10, 2015, at 10:00 a.m. in Department CJ-1, Central Jail, Santa Ana.

At approximately 9:30 p.m. on Nov. 7, 2015, Santa Ana Police Department (SAPD) officers initiated a traffic stop near Euclid Street and McFadden Street on Troung, who was driving a sedan. Troung is accused of ignoring the traffic stop and leading officers on a pursuit. He is accused of driving for approximately two hours in and around the Santa Ana area. During the chase, Troung is accused of firing a gun at the pursuing SAPD officers, who were not struck by the bullets. SAPD never fired their weapons back at Troung.

At approximately 2:40 a.m. on Nov. 8, 2015, Troung is accused of exiting his vehicle and was then arrested by SAPD, who also investigated this case.

On Dec. 2, 2014, Troung had both of his felony convictions reduced to misdemeanors under Prop 47, and he was not placed on parole, probation, or post-release community supervision. Five months later, on April 3, 2015, Troung was arrested for carrying a switch blade knife on his person. Three days later, on April 6, 2015, he was arrested again for being in possession of a controlled substance.

On Jan. 20, 2015, during his State of Public Safety in Orange County address, District Attorney Tony Rackauckas told the audience, “[We] are working together to carefully navigate the litigation that is coming up in the Proposition 47 cases so that only the defendants who are eligible will get the benefit of the law. Unfortunately, many dangerous felons will be let back into the community early, and I fear that this law will result in the increase of crime.”

“Mr. Troung’s actions endangered the community and our officers,” said Santa Ana Police Chief Carlos Rojas. “Our officers did an outstanding job in bringing this incident to a successful conclusion with the surrender and arrest of Mr. Troung. However, it is concerning that while he is facing numerous felony charges, his possession of the stolen handgun that he used to shoot at our officers is likely a misdemeanor, in accordance with Proposition 47, due its value being under $950.”

“The Santa Ana Police Department should be commended for resolving this extremely dangerous situation without a civilian or police officer getting shot,” said District Attorney Rackauckas.