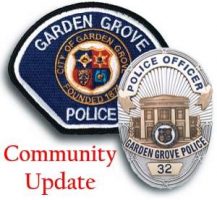 Early on Friday morning, Garden Grove Police Officers were conducting speed enforcement in the area of Chapman Ave and Medina Dr. when they noticed a driver exhibiting unsafe speed.

A further search of the car, yield an unregistered and un-serialized AR-15, a Smith & Wesson 500 Magnum, high-capacity magazine, ammunition and nunchucks.

The driver was also later found to be a convicted felon, prohibited from possessing any of the items.

The driver was arrested and later booked into the Orange County Jail.

« The SAPD seized several guns last week including a loaded AR-15
A suspected DUI driver flew off an O.C. freeway and slammed into a motel »