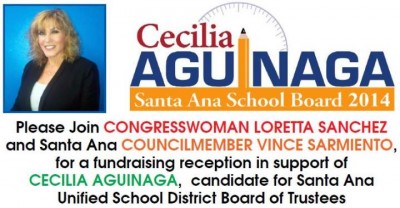 Cecilia Aguinaga, a leading candidate for the SAUSD School Board election in November, is hosting a campaign fundraising reception on June 5, from 5 to 7 pm, at The Avocado restaurant located at 2525 N. Grand Ave., in Santa Ana.

« The O.C. Register appears to be doomed
Drive by shooting in the Park Santiago Neighborhood? »