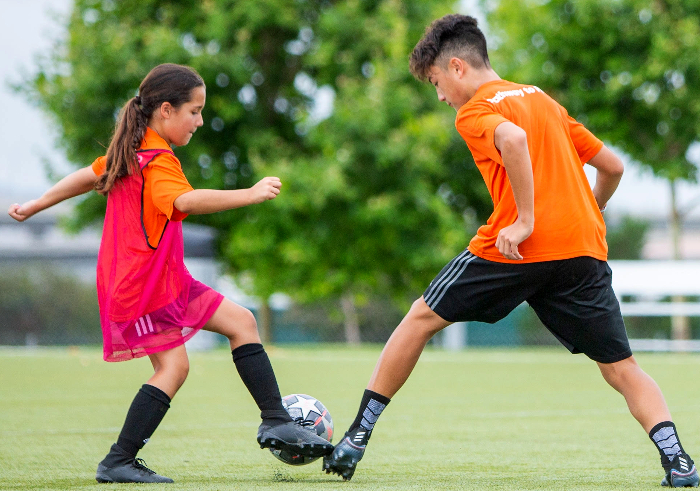 Irvine, CA – The Orange County Soccer Club Community Foundation (OCSCCF), with support from The DICK’S Sporting Goods Foundation, announced the launch of a free after-school soccer league for eight participating schools in the Santa Ana Unified School District. The co-ed league is open to 4th and 5th graders and will run for ten weeks beginning on August 29th. The OCSCCF will provide coaches, referees and equipment in addition to helping manage the league. OCSCCF aims to teach these students soccer fundamentals, teamwork and youth leadership.

“We are thrilled to launch our inaugural free after-school soccer league with Santa Ana Unified School District. Santa Ana is a community filled with soccer fans, and we know that these students will benefit greatly from exposure to the “Orange County Way” of youth soccer training, the expertise of our coaches, and the opportunity to get great exercise in a structured league,” said Lisa Keston, Executive Director, OCSC Community Foundation. “Our hope is to make free high-quality soccer training accessible to as many students as possible across Santa Ana.”

This after-school league is the first of its kind for OCSCCF, and they hope to expand to more schools and districts throughout Orange County in the future. Practices will be held on Wednesdays and games will be played on Fridays. All participating students will train based on an age-appropriate soccer curriculum to help them improve their skills.

The DICK’S Sporting Goods Foundation has made a generous donation to OCSCCF’s SAUSD league to help cover a portion of the costs.

“We are excited to help bring this soccer league to students in the Santa Ana Unified School District,” said Aimee Watters, Executive Director of The DICK’S Sporting Goods Foundation. “We are proud to support OCSCCF in their efforts to provide a safe and accessible space for youth sports participation in the community.”

“Santa Ana Unified School District is proud to team up with the Orange County Soccer Club Community Foundation to provide an invaluable resource to our students.” said Jerry Almendarez, Santa Ana Unified School District Superintendent. “Exercise through organized sports offers our children another opportunity to learn teamwork, collaboration, discipline, and other important skills that can translate directly into their education. We are incredibly grateful to OCSCCF for this resource to our SAUSD community.”

The OCSC Community Foundation (OCSCCF) is the official charitable arm of the Orange County Soccer Club (https://www.orangecountysoccer.com/foundation). As a 501(c)(3) organization, OCSCCF serves the greater Orange County community by using soccer as a means of promoting greater health and wellness, supporting and empowering youth, fostering an inclusive environment, and unifying our local community.

Orange County Soccer Club (OCSC) is Orange County’s only professional soccer team and a founding club of the United Soccer League (USL). The USL Championship comprises 27 teams across the United States and is the fastest growing Division II professional soccer league in the world. The team plays its home games at the immaculate 5,500-seat Orange County Great Park Championship Soccer Stadium located in Irvine, CA, a new facility surrounded by world class amenities and 24 soccer fields. OCSC won its first USL Championship in November by defeating the Tampa Bay Rowdies by a score of 3-1 at the 2021 USL Cup.  OCSC is dedicated to being the leader in professional player development in the United States, providing the most talented young players in Southern California and across the United States a pathway to professional soccer and to the top leagues around the world.  OCSC’s strategic partner is historic European power Rangers Football Club of Glasgow of the Scottish Premier League. In November 2021, OCSC’s 17-year-old center back, Kobi Henry, became the first active USL player to be called up to the full US Men’s National Team for a friendly game against Bosnia and Herzegovina and in June of 2021 Henry was transferred to Ligue 1 side, Stade de Reims in the largest transfer in USL history. Additionally, in 2019 OCSC signed the youngest male in United States soccer history to a professional contract, Francis Jacobs, at the age of 14; Jacobs played in the 2020 Alkass Cup with Rangers in Qatar and will be returning to train with Rangers in the future. OCSC also executed the first ever player move from the USL to the German Bundesliga by sending Bryang Kayo to VFL Wolfsburg in early 2020, followed by the transfer of OC native Aaron Cervantes to Rangers FC in late 2020.  OCSC also received the largest transfer fee in league history within the USL for a 2021 intraleague transaction. Club owner and Chief Investment Officer of LARO Properties, James Keston, purchased the club in 2017, re-branded the team as Orange County SC and continues to lead the OCSC management team as Chief Executive Officer. OCSC, alongside its sister organization the 501c3 Orange County Soccer Club Community Foundation, are committed to creating a world-class soccer organization that focuses on the fans, players, and youth clubs of Orange County.

ABOUT THE DICK’S SPORTING GOODS FOUNDATION

The DICK’S Sporting Goods Foundation is a tax exempt 501(c)(3) nonprofit corporation with a mission to inspire and enable sports participation. It was created by DICK’S Sporting Goods as a private corporate foundation to support DICK’S charitable and philanthropic activities. Driven by its belief that sports make people better, The DICK’S Foundation champions youth sports and provides grants and support to under-resourced teams and athletes through its Sports Matter program and other community-based initiatives. Additional information about The DICK’S Foundation can be found on sportsmatter.org and on Facebook, Twitter and Instagram.

Approximately 45% of district students are English learners with Spanish being the most common language, and approximately 87% of the student population is eligible for free and reduced-price meals.