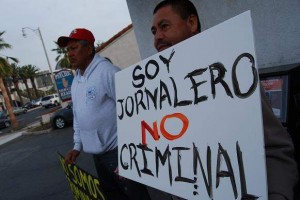 The City of Costa Mesa passed a law prohibiting the solicitation of work (10-354) in Dec. of 2005.  Day laborers continued to resist the ordinance by congregating at Corners of Resistance, and people from the Tonantzin Collective monitored police behavior at the corners. This policy was combined with an agreement to have immigration officers in the Costa Mesa Police Station. In Sept. of 2009, 12 day laborers were picked up by undercover Costa Mesa police disguised as employers. All 12 were arrested and booked for the “crime” of looking for work. All 12 of them were later turned over to ICE custody and deported since they were undocumented.

This outrage encouraged Costa Mesa day laborers to sue the City along with the Tonantzin Collective, and the National Day Laborer Organizing Network. Plaintiffs were represented by attorneys from the ACLU, NDLON and MALDEF. The law was finally repealed in Oct. of 2013. Day laborers can freely look for work in Costa Mesa without police harassment!

El Centro Cultural de Mexico  is an alternative space in Santa Ana where the community can find cultural, educational, and artistic activities that strengthen their identities, develop their talents and develop a sense of leadership in their community.