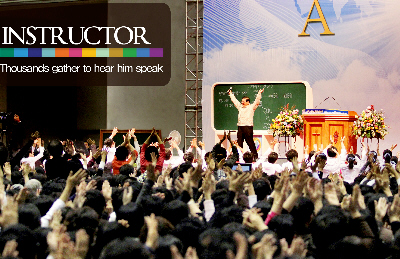 The Advocate testifies the Highest Truth at Crystal Cathedral
Event date: July 21, 2012 at 10:30 AM
Seminar Instructor: Christian Instructor Man Hee Lee of the Republic of Korea

Christian Instructor Man Hee Lee will be testifying to the fulfillment of the New Testament prophecies—specifically Matthew 13 and 24, and the entire book of Revelation—according to what has been seen, heard, and commanded based on the 5W’s and 1H (who, what, where, when, why, how). The gospel of heaven, Jesus’ prophecies of the New Testament, was preached in Europe to the West, and was testified to all the people of the world according to the prophecy of Matthew 24:14: “and this gospel of the kingdom will be preached in the whole world as a testimony to all nations, and then the end will come.”

This testimony is given to those who believe in the prophecies of the Bible and have been waiting their fulfillment. Having started in the Republic of Korea, the fulfillment will now go out to the ends of the earth.

Every month in Korea, more than 3,000 people gather to listen to the Revealed Word from Instructor Lee, and that number is growing rapidly. Pastors from 28 different countries who heard this news invited the instructor to come to Europe. Because of the high demand, Instructor Lee is returning to Europe on July 4 for the second time in the past 2 months. The fulfillment of the New Testament is the fulfillment of God’s purpose and the hope of all humanity. The world of faith in America must open up its eyes to his testimony as he is invited to come to America. America cannot wait any longer.

A true believer who believes in God, Jesus, and the promise of the Bible must hear these words, and everyone who attends will not regret it. God’s will, the purpose of the New Testament, is completed through this.

As seating is limited, please reserve your seat at www.worldopenseminar.com via the contact page. Visit the website to learn more about Instructor Lee’s remarkable life, testimony, and worldwide impact.

Anyone who is a believer will regret it if he or she does not hear it nor believe it.

The Christian Instructor Man Hee Lee is the descendant of a Korean royal family of the Joseon Dynasty—a house with 500 years of history. Born in 1931 from a rural farming region, Man Hee Lee was given his name, meaning complete light, by his grandfather—who before Lee’s birth had a precognitive dream regarding a light of heaven shining down.

Man Hee Lee is a living witness to many of the historical events that occurred in Korea. He is also a man of merit as he fought in the frontline of battle during the Korean War. He is someone who guided the Saemahul Movement (New Community Movement) which became a stepping stone to the boom of the Korean economy.

His life of faith began one day in the midst of prayer. A huge star from heaven came down and, by its guidance, he met a heavenly person. He then wrote a pledge in his own blood and swore his loyalty. From that moment on, he walked on the path of faith. He saw and heard the events of the New Testament and he is now testifying about Revelation according to the commands of Jesus.

During this time when Christianity is rapidly decreasing in Korea, hundreds of thousands of people from the East, West, North and South are gathering and believing, after hearing the work of the Holy Spirit and the testimony of Revelation. The news of all this rapid growth is spreading internationally as Christian Instructor Man Hee Lee receives numerous invitations to speak.

If one believes, one becomes people of heaven, receiving salvation and entering into one’s hope.

This is the greatest truth that even theologians acknowledge. People in Korea must wait as long as one year to hear lectures from this instructor. Inviting this instructor to our land, the United States, is an opportunity the heavens gave us, and I hope we will be grateful for this huge opportunity.

He will take questions after the seminar lecture and he will comply with the interviews of the news teams.

199 thoughts on “Updated: Christian instructor Man Hee to speak at Christ Cathedral on 7/21”