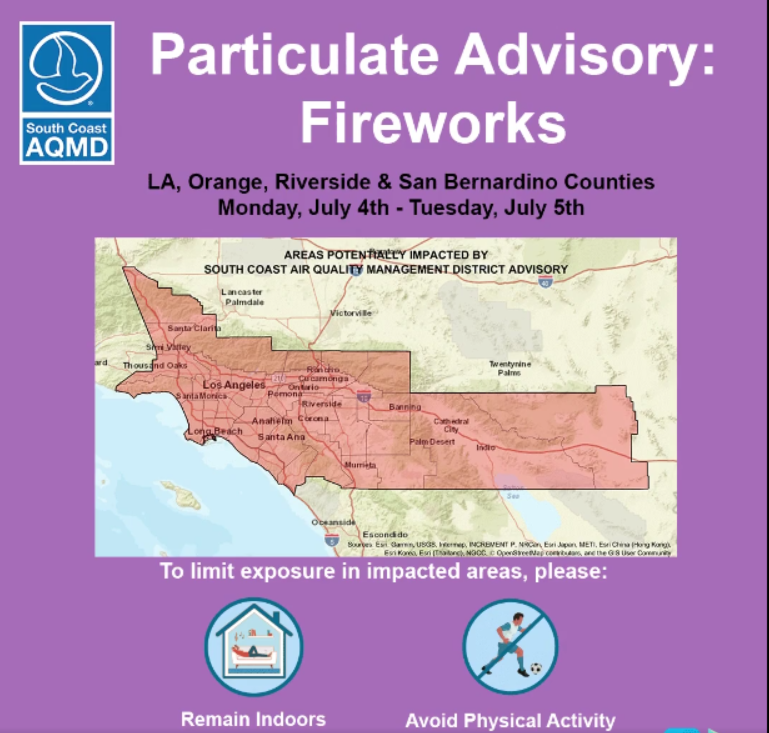 Poor air quality is likely in areas throughout the South Coast Air Basin and in the Coachella Valley on July 4th through July 5th. Fireworks are known to emit high levels of particulate matter (PM2.5 and PM10) as well as metal air pollutants, all of which can contribute to negative health effects.

Due to fireworks related to Independence Day celebrations, the Air Quality Index (AQI) may reach the Very Unhealthy AQI category or higher across the region from the evening of Sunday, July 4th through the early afternoon on Monday, July 5th. The use of personal “backyard” fireworks also contributes to this air pollution and can further increase how much air pollution a person is breathing. In addition, personal “backyard” fireworks may create even higher levels of fine particulate matter locally that are far higher than regional particulate levels.

Fine particulate matter levels on July 4th and July 5th are typically among the worst (highest) days of the year in the South Coast Air Basin and the Coachella Valley. The smoke and combustion products from fireworks add to the fine particles already present in the Basin that are primarily caused by motor vehicles, as well as fugitive dust and industrial emissions. The use of personal “backyard” fireworks can also spark wildfires, which can be a major source of fine particulate matter.

Breathing fine particulate matter can lead to a wide variety of cardiovascular and respiratory health effects such as heart attacks, asthma aggravation, decreased lung function, coughing, or difficulty breathing and may lead to premature death in people with heart or lung diseases.

Areas of direct impacts may include major portions of the South Coast Air Basin and the Coachella Valley. Air pollution levels are typically worse in areas where personal fireworks are widely used.